Man, it's been a busy month already!  But I do have some sewing to share again. First up, the UFO challenge project I selected from my many UFOs to finish for guild.  This started with a monthly challenge of fluorescent color.  The orange is surely bright but not really fluorescent, but I really like the way its turning out. 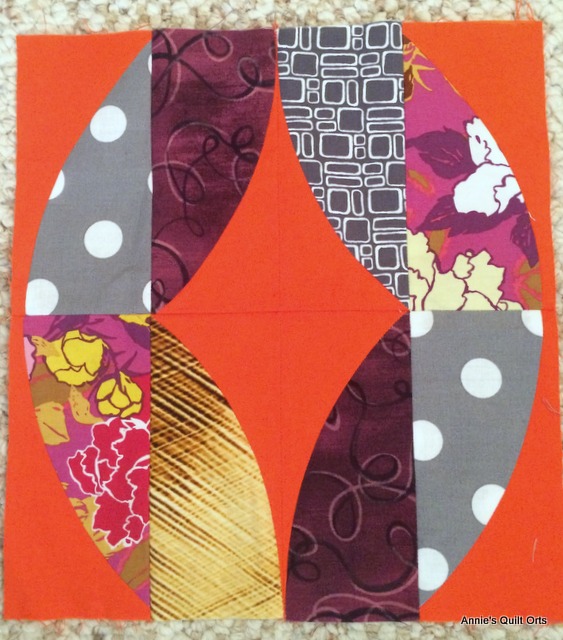 This is Metro Twist, from Sew Kind of Wonderful and the Quick Curve Ruler. 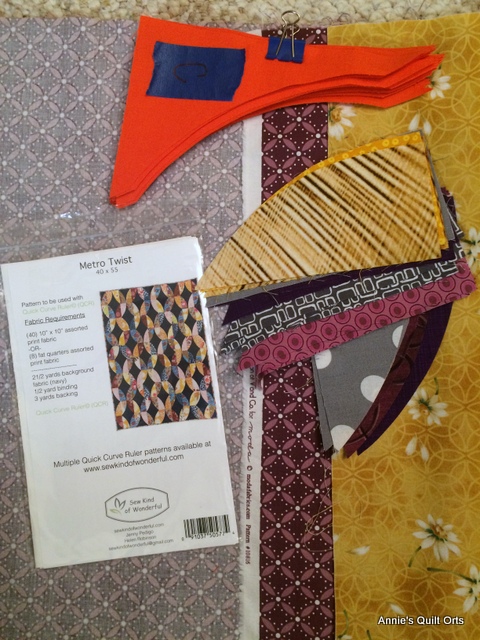 It takes a bit of rewiring your brain every time you play with the ruler, but it isn't hard.  I cut a bunch of parts for the blocks.  I found that I did not have enough of the orange for the pictured quilt, but decided I must have planned to make a wall hanging for just that reason.  Notes, people!  Make notes! 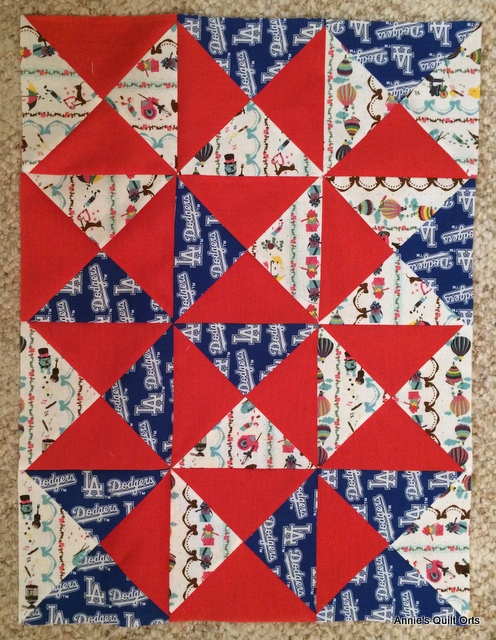 Also for guild, we are making dog and cat beds for a rescue organization.  Good thing most animals are colorblind because these are made of totally random fabrics!  They are about 16x20" finished.  The rescue place was recently flooded out and will be grateful to get these next month.  I'll quilt and bind it this week. 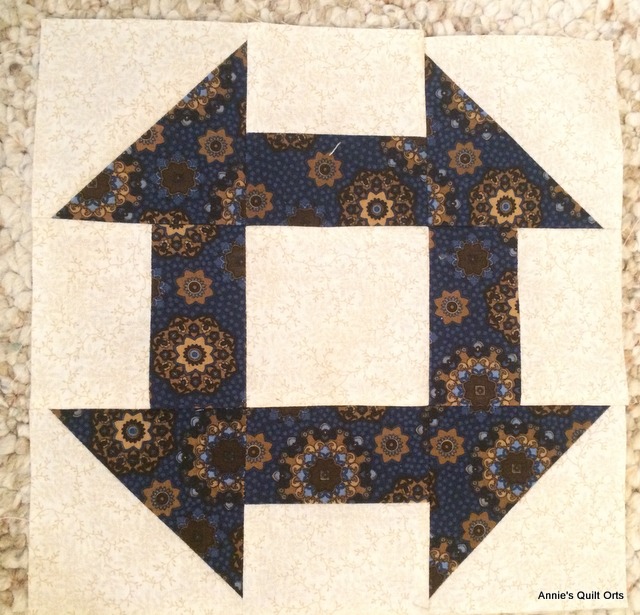 I've joined the scrap challenge at SoScrappy.  Blue is the January color, which is hardest for me since I use very little blue in my quilts, generally.  I decided to make Churn Dash blocks in two sizes.  This is a 9" block and I'll make 4 1/2" ones too.   I just love Churn Dash!

Finally, I finished a long overdue Christmas gift that needs to get delivered this week.

Simple 6" 9 patches and some setting triangles and sashing.  I again used a holly leaf for the small squares, so easy to do. 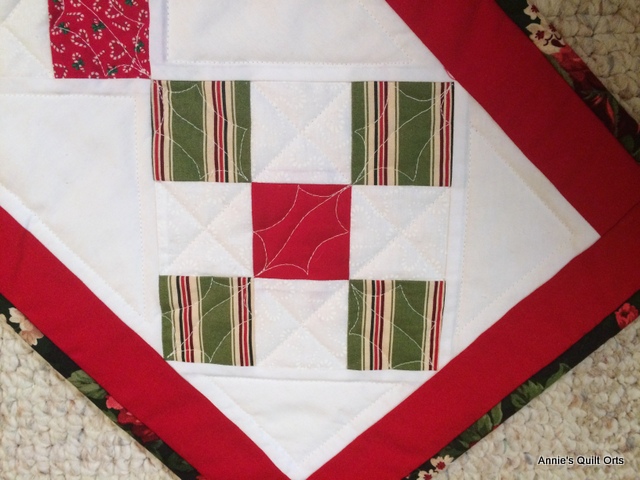 There was a lot of burying threads but I felt the simple design needed simple quilting. 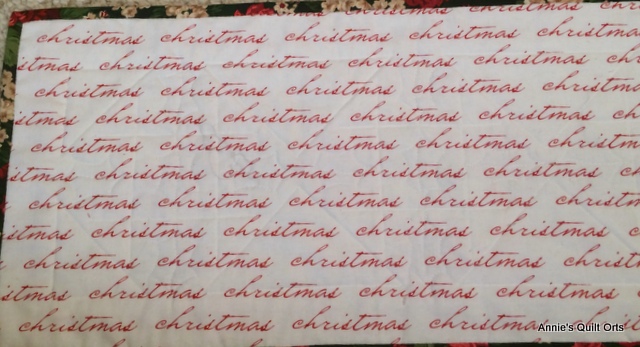 The backing is some leftover from my Christmas Quilt.  I actually hand stitched this binding, which I rarely do these days.  I do enjoy handwork and have plans to pull out the wool applique for another old quilt UFO to work on.

The Timber Quilt (Alison Glass pattern), now several months past due for a wedded couple, remains in pieces, but much bigger pieces! 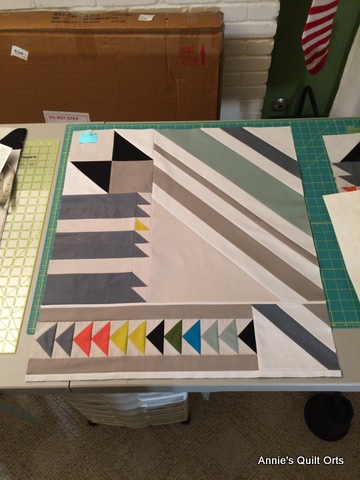 There were four of the narrow angled strip sections, two of which were mirror image.  After constantly realigning the first group on my cutting mat, I finally got smart and used a visual aid. 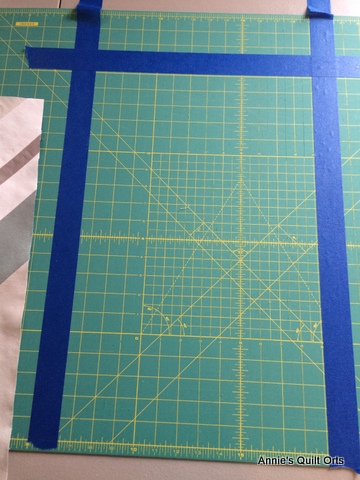 Ah, much easier!  The finished size of the section was the outer limit of the tape, so it was easier to see where the strips were to go.  The layout was complicated by this being a rectangle rather than a square.  There are a couple of squidgy areas I will have to be careful to enclose in the seam allowance so as not to leave a hole. 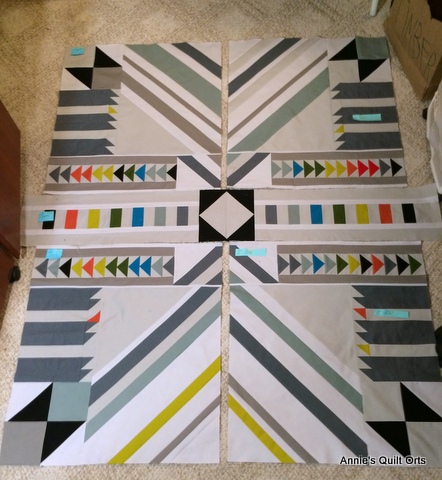 Here are the completed four corner sections laid out with the center section.  Next, neutral colored sashing will be added along with outer borders in Silver Kona.  I'm making the quilt a little bigger than the pattern calls for, but not as big as the optional 15" border.  So some MATH will be required.  Therein lies the current stalling... It was my intention to get this quilt top together over my Christmas holiday, but sadly I did very little sewing.  Time to get back to it. 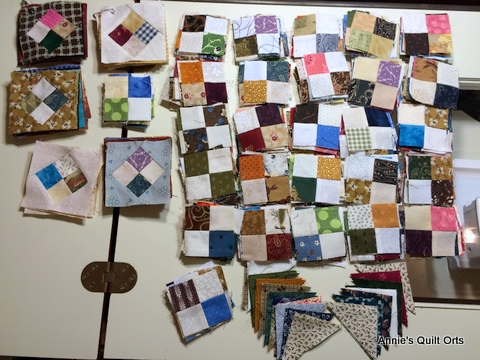 I pulled out my four patches and cut a bunch of corner triangles, as I thought I could use them as leader enders while sewing the Timber strips.  But that didn't work out because of the uneven length of the strips.  My sister stopped by while I was counting out how many hundred four patches I have (there are about 300 in this photo).  She almost had a stroke, as small squares affect her deeply :)  I have yet to decide how I will put these together once the triangles are all added.  Originally I was going to set them like the Go Four It quilt by Edyta Sitar for American Patchwork & Quilting, but I have seen some other layouts I like too.  A long term project can be a good thing.
at January 05, 2016 6 comments:

As per usual, I'm a little late to the Wrap Up game.  2015 was a very busy year in both work and personal life hours and it sure contributed to less sewing/quilting/stitching.  I did not make many large quilts but there were a lot of smaller projects completed. On the whole, there were a lot of things I kept or finished for myself--I know, right?  I also made a TeePee for my grandson's first birthday.  He loves it. 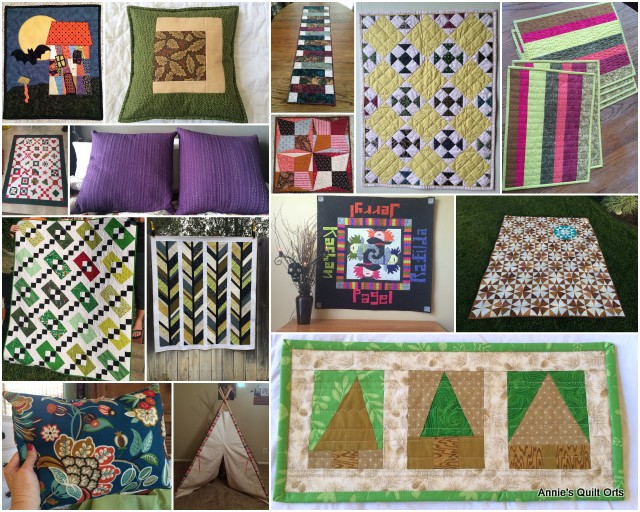 There were also a lot of starts and stops on multiple projects, not shown here!  My final finish of the year is the little tree runner, which I gave to my new friend and manicurist. 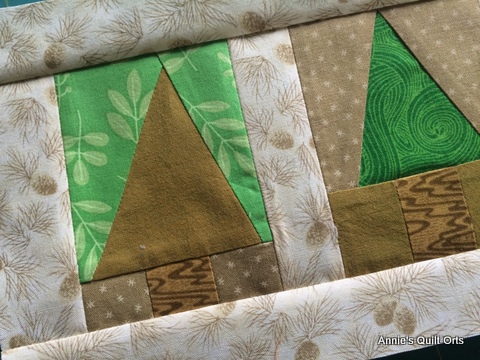 These improv trees were left over from last year's guild challenge where I picked two crayons (mine were old gold and green) .  I sashed them with this pinecone print. 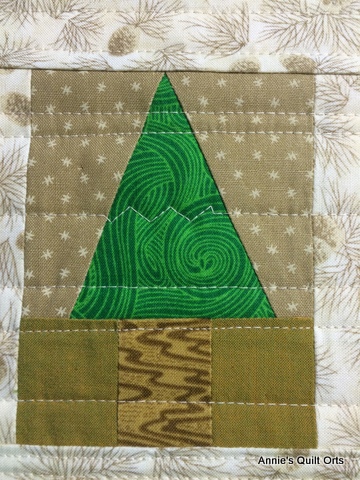 I had fun doing some straight line quilting with a little detail within the trees. 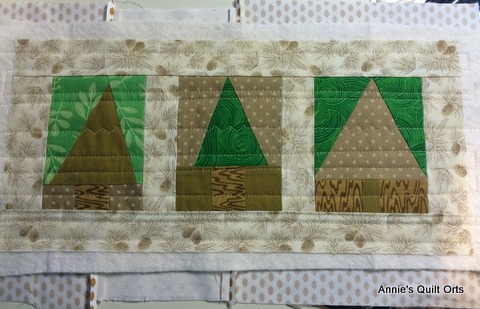 Christmas was hectic, in that DH's 96 year old mother was taken to the ER by ambulance on Christmas Eve with abdominal cramps and difficulty breathing.  She checked out fine, except for high blood pressure, and we took her home, but our Christmas Eve gathering with our kids got pushed back a bit.  Grandson Cove, 22 months, was revved up but adorably so. 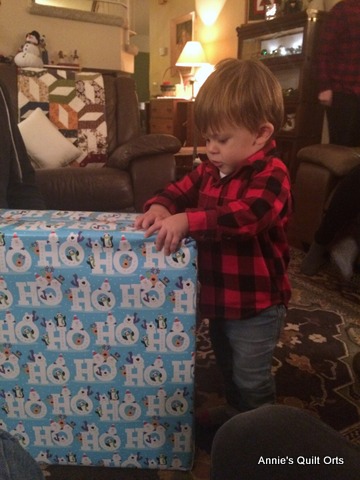 Very serious as he starts in on a big gift from his Uncle Nick. 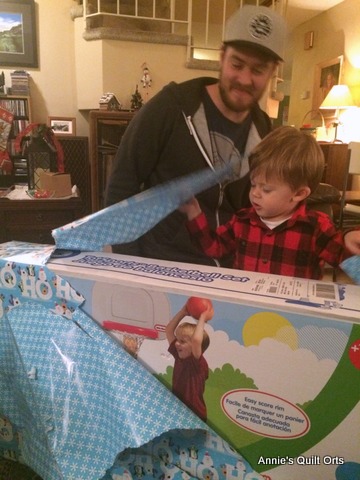 He removed every single bit of wrapping paper before checking out his gift. 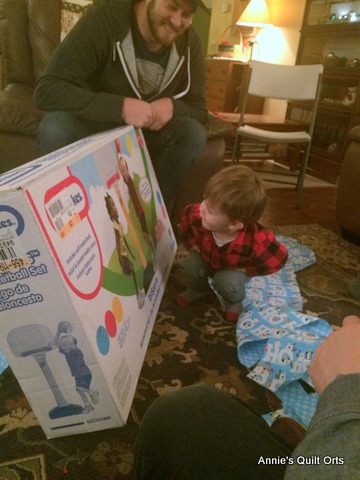 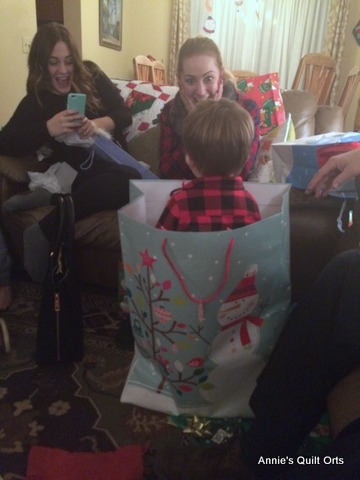 Cove had a great time inside this large gift bag, in which we kept throwing tissue and wrapping paper and he would pop up and down.  I caught his Mama and Auntie's reactions. 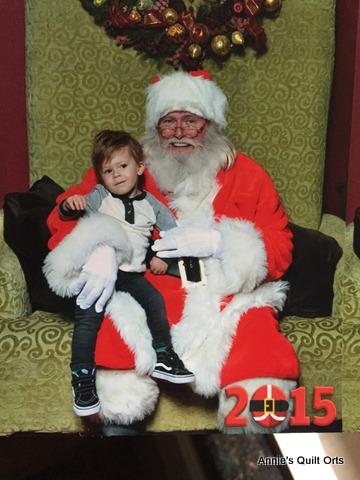 He wasn't quite sure about Santa at the Mall, but at least he didn't cry! 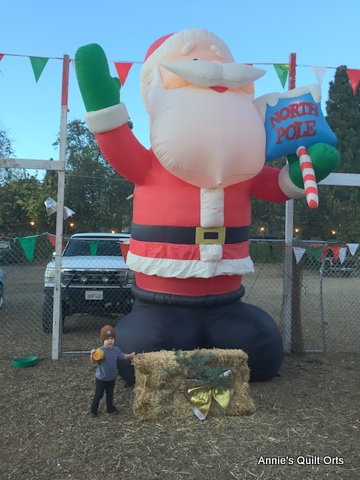 This Santa at the tree lot absolutely dwarfed the little guy. 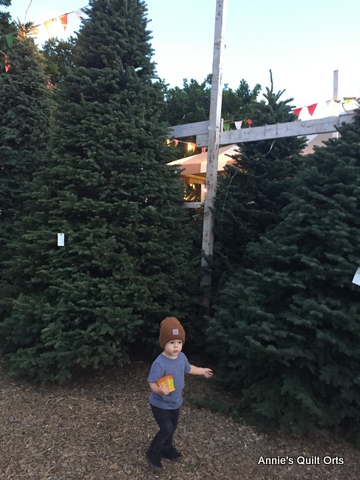 And his parents reported that he said about this extra large tree, "Take home".

We feel very lucky to get to see our kids and grandson often and look forward to the next grandson arriving in March!

And finally, some changes for my followers who use Google Friend Connect, per Blogger Buzz:

As part of this plan, starting the week of January 11, we’ll remove the ability for people with Twitter, Yahoo, Orkut or other OpenId providers to sign in to Google Friend Connect and follow blogs. At the same time, we’ll remove non-Google Account profiles so you may see a decrease in your blog follower count.

We know how important followers are to all bloggers, but we believe this change will improve the experience for both you and your readers. 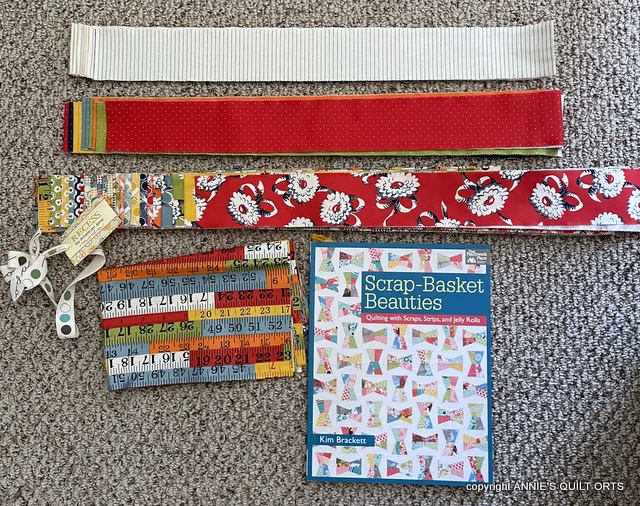