There was very little sewing being done the last little while, so my design surface has been empty.  My sewing room had become completely unworkable with stuff piled everywhere. But having cleared out the whole room for the large crowd we hosted for Thanksgiving dinner, a fresh start was afforded once again!  I spent a lovely couple of hours on my High Cotton quilt (Kim Diehl, Simple Comforts book).  After counting up all the colors already made, I decided to add more green blocks.  No surprise there, as green is my favorite color :) 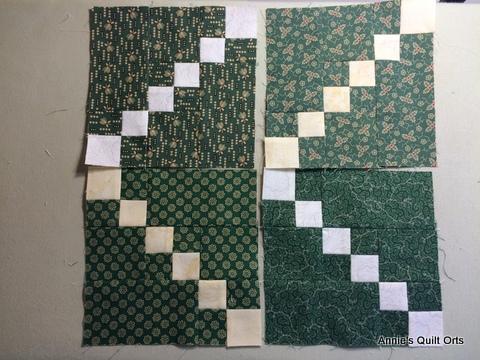 These Civil War prints were the the last hoarded fat eighths from a set I bought years ago, I think at the International Quilt Festival when it was in Cincinnati.  I now need 13 more pieced blocks to match the 63 the pattern requires.  The quilt dimensions are a little shorter than I like, so I may add another row once I get the top laid out.

Then I worked on a Guild charity quilt.  I picked up the kit with completed top, backing, and batting a couple of months ago.  Last weekend at our Guild Sew-In I started pinning the quilt, only to find the backing was several inches too short, but luckily extra wide. That ended the pinning session until I could cut off the extra width and stitch it onto the bottom.  Yesterday I accomplished that task and began quilting.  A spool of pink Aurifil thread from the thread bin matched perfectly and I used my favorite wiggly line to cross hatch the top. 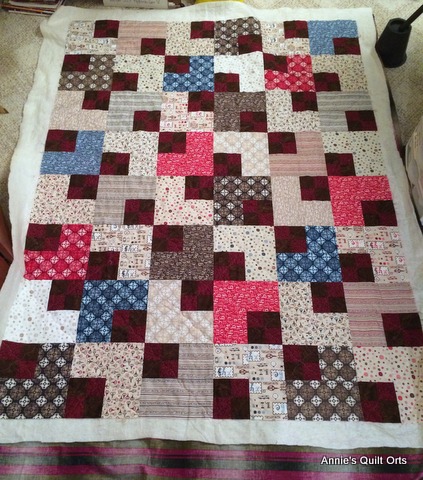 Really cute layer cake quilt pattern, with sewing motifs, text prints, buttons and graphics on the fabrics.  I wish I knew the designer.  Another guild member constructed the top at a previous Sew-In. 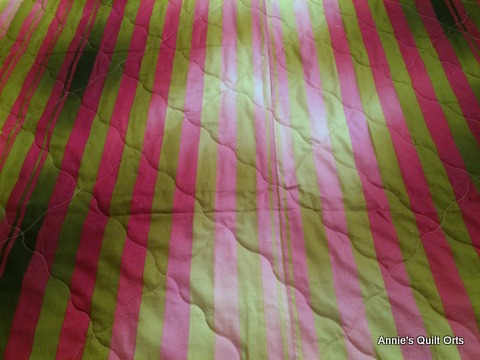 I love the ombre striped backing.  I tried to make the crosshatch a little more modern by skipping every other diagonal to make rectangles rather than squares.  Binding and a label will be completed this week.  I've been elected Secretary for next year's Board and look forward to getting more involved.  Surprisingly few people wished to jump in, but we are a new guild still building membership--I've only been a member for a year. Hopefully I'll do a good job!

One last autumn photo before the Christmas onslaught!
It was a wonderful, crazy, packed and loud Thanksgiving feast.  We ended up feeding a total of 28 at dinnertime, and had an additional 13 people stop by (two more ate!).  It was too cold to eat on the patio so we all crammed into the house.  Thank goodness I took a day off work for clearing out my sewing room.  It was restaged with a table for 7, a seating area, all the dishware on my sewing desks, and the desserts on the pull out table of the Hoosier.  The remaining 21 were at three tables in the living room, including three visitors from Perth, Australia, a family friend and his two teen-aged boys. The boys are are experiencing their first visit to the US--I'm sure Thanksgiving was an experience they'll remember!  There was enough food, even though I later discovered I forgot to open the olive cans and the vegetables served were pretty light as only one bag of french beans got used.   I'm hoping we host a more reasonable 18-20 people next year:)

On Friday my sister Kathy and sister in law Laura invited me to join them for some shopping in the old downtown.  We had a lovely time poking through gift shops and antique malls and thrift stores.  I found a bunch of brand new boxes of Christmas cards for really cheap, which will be great for my husband to hand out to his customers.  Score of the day was a new old piece to add to my beloved Grandma's set of Franciscan Apple dishes that I use every Thanksgiving: 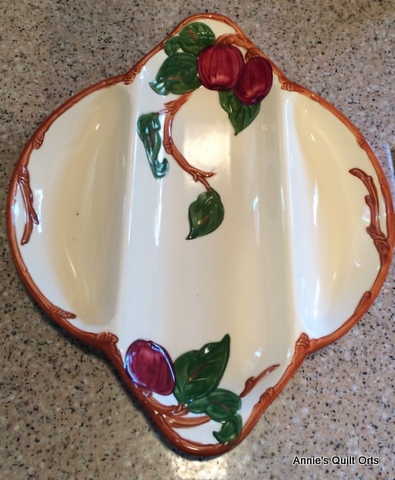 It was grimy and has a small flaw in one of the sections (black dot), but the hand painting is gorgeous on this three section relish tray.  It is about 12-14 inches long in the middle section.  I also had fun combing through a rack of old postcards, and paid $2 for this Birthday Greeting: 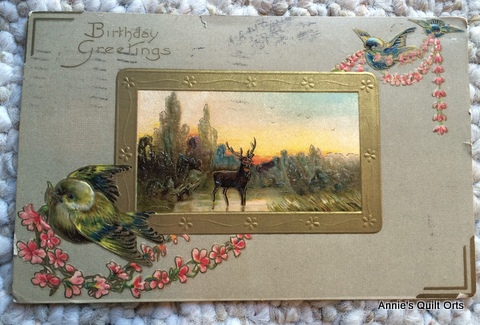 The embossed and colored birds and garland, deer and stream were so sweet. 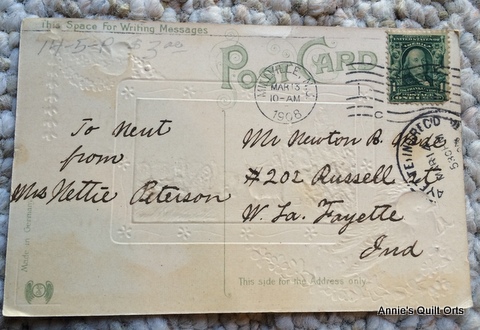 It looks like this went to Mr. Newton B. Ward in West Lafayette, from Mrs. Nettie Peterson.  The postmark reads March 13, 1908 Millville, NJ, received in W Lafayette on March 14, 1908--only one day to travel that far in 1908!  I love that this dear little greeting has survived for 107 years.  My sister Kathy and I had a very memorable trip to Lafayette in 2006 when we attended a quilting workshop by Ricky Tims that was held at Purdue University.  We never traveled on Russell Street, that I recall, but the street still exists according to Google Maps, and is just west of Purdue.  Such fun to randomly find a connection to a place I've been to.

I spent some of yesterday repacking Grandma's Apple dishes and reassembling the sewing room. Then I did something entirely selfish.  I pinned a quilt for ME! 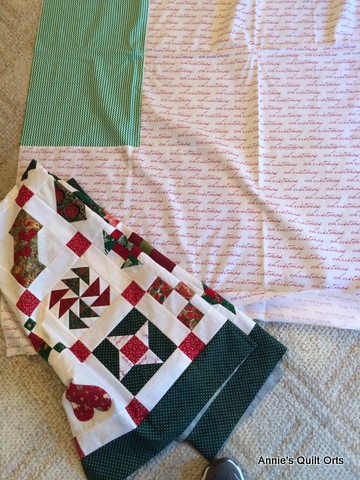 This Christmas quilt has been folded on a hanger with the finished backing for over a year.  The blocks came from a long-ago swap when I belonged to an on-line group called Quiltbuddies. 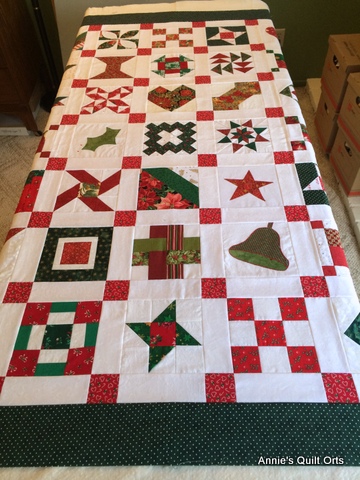 Can't wait to have this hanging on my railing for the season!

I've been busy working, but no sewing or blogging seems to be happening, unfortunately.  This past weekend my daughter Erica and I took on a project I've been longing to do for some time--erasing the 80's fake "aged" brick fireplace.  Of course this ended up being one of the hottest weekends ever in November, but we pressed on. Having done many painting projects, we are well aware that prep takes five times as long as the fun painting part.  There was a lot of cleaning, wire brushing, vacuuming, soot removal, and washing. We let the brick dry overnight, then Erica did all the taping. 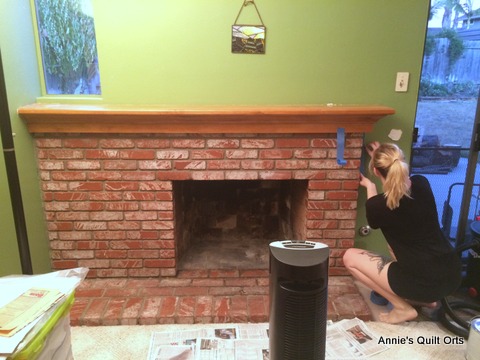 She did a really good job and we commenced with brushes and rollers. 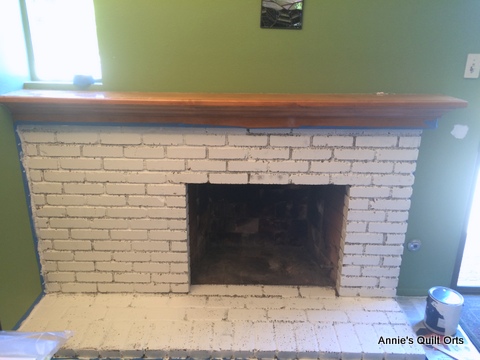 First coat went on fairly quickly and we let it dry for about 3-4 hours. 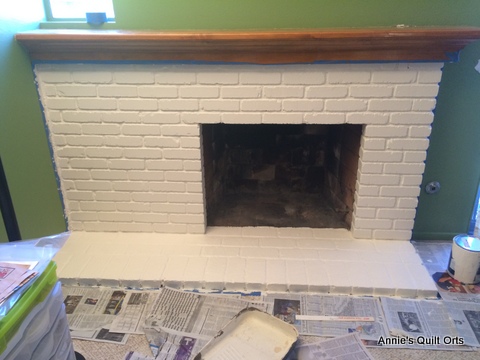 Second coat made the transformation even better.  There was some touch up after a few more hours, including wiping off some of her cat Lucy's dusty fireplace exploration paw prints, but by Sunday night the 80's were gone forever. I couldn't wait to start staging the mantel. 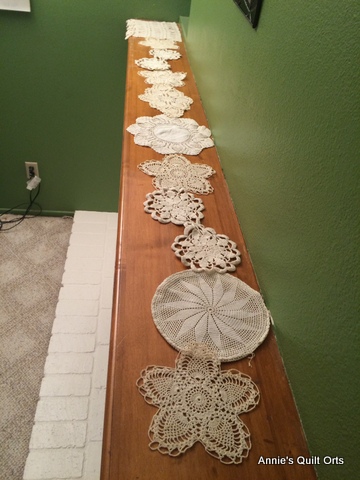 An idea I pinned on Pinterest worked out sublimely with these doilies my husband's maternal grandmother crocheted so many years ago. 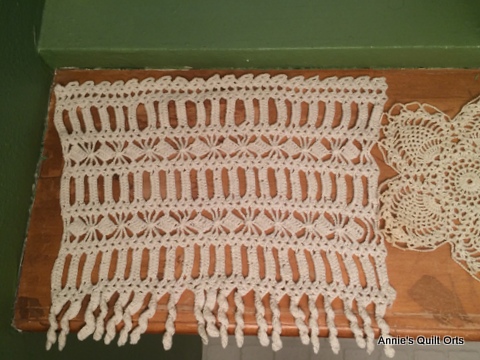 Love the filet crochet one with its curly fringe. 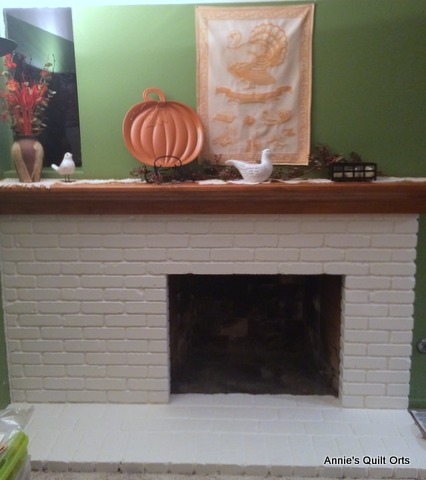 The rest of the room is a complete disaster, but the mantel is ready for the holiday! 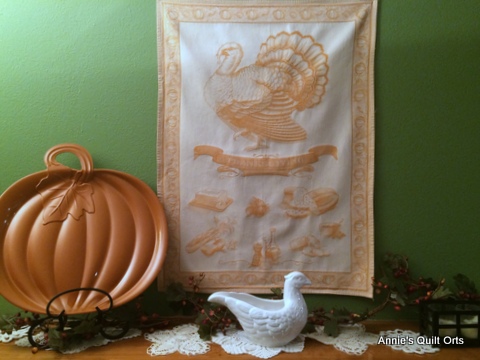 Last year my sister-in-law Laura gave me the beautiful linen towel and the pheasant gravy boat.  Paired with a length of grapevine garland and a glittery pumpkin platter, the fireplace is ready to glow over the 27 we are feeding this year for Thanksgiving.  Lots of work to get ready for the crowd, but looking forward to the love and laughter and fun of being together.

Tuesday's Orts--bits and pieces of events and thoughts that land here occasionally. 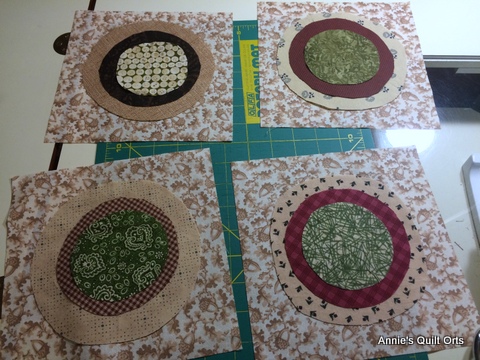 The acorn print worked well with the brown inner border and the green final border fabrics, I thought, and unified the corner bullseyes. 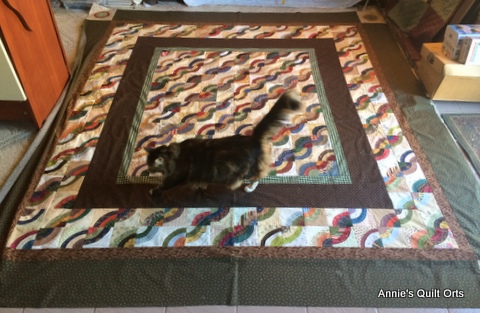 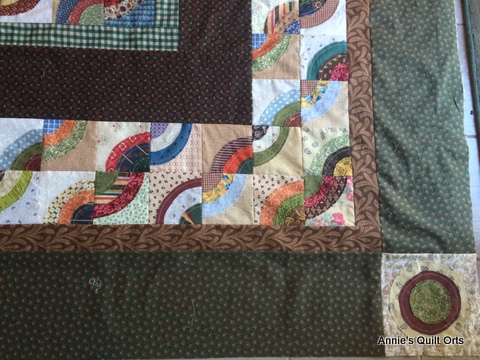 After a local search for dark green print, the outer border fabric I ordered from an Ebay seller.  It is a Kansas Troubles print from a line a couple of years old and the fabric is simply yummy in quality and hand.  I think it goes well with the Thimbleberries print that was originally the outer border before I started expanding the quilt to queen size.  Both have small leaves scattered all over. 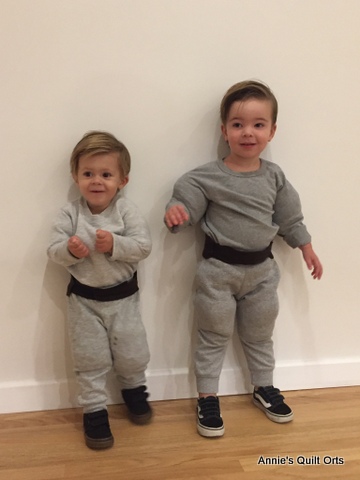 Here are Hans and Franz, ready to Pump You Up (Saturday Night Live lives on!).  Cove/Hans is flexing pretty hard right there. My contribution was making the weightlifters belts. 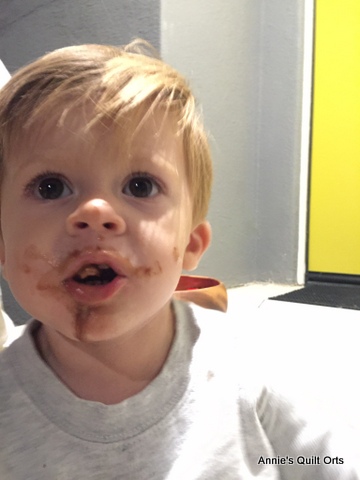 Cove appears to have gotten at least some of the chocolate in his mouth!
at November 03, 2015 6 comments: 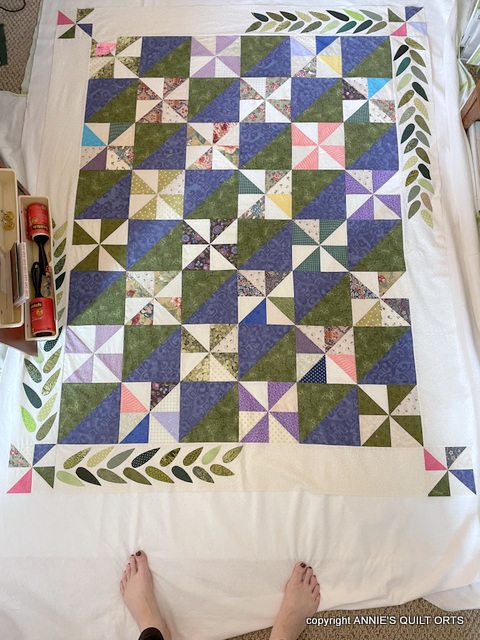