Work on the memory quilt for my sister in law has progressed to the layout stage. Yesterday morning I squeezed most of the 96 sewn blocks into the small floor space of my sewing room. 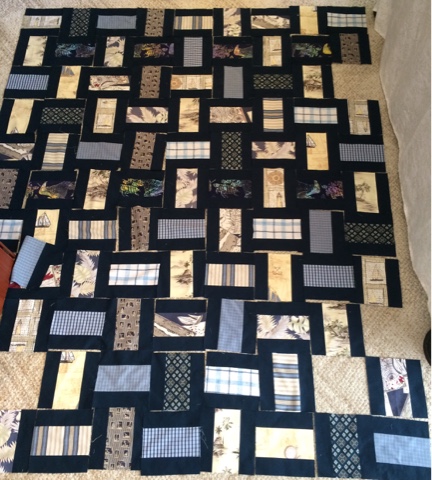 I'd decided to choose the last three block  shirt colors after layout. If you notice, I have a sort of plaid effect going with same print rows. I may add one more.  My process was interrupted by a delightful invite from DD Erica to drive up to Santa Barbara and shop on State Street. We spent a few hours at that, had lunch and enjoyed the coastal views on the drive.

I'm finished cutting for a memory quilt and am enjoying piecing these simple blocks. 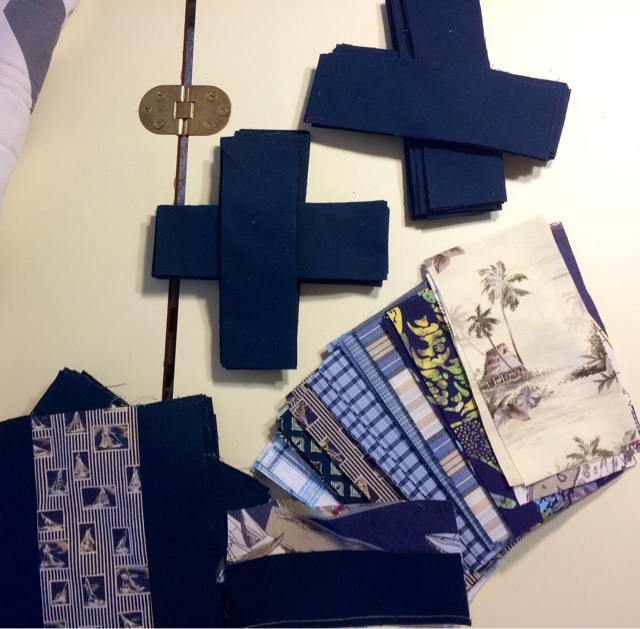 The center fabrics were cut from my brother-in-law Jan's shirts. I chose a mix of ocean and sailing prints and graphic stripes and checks with his wife, last year after he passed away from cancer. 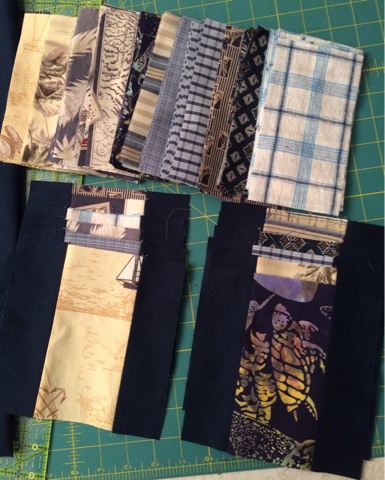 The shirts were cut into 3.5x6.5 bricks and some 2.5" binding strips, and I'll use some larger sections, possibly including pockets, for the backing. Sashing strips are 2x6.5" for a 6" finished block. 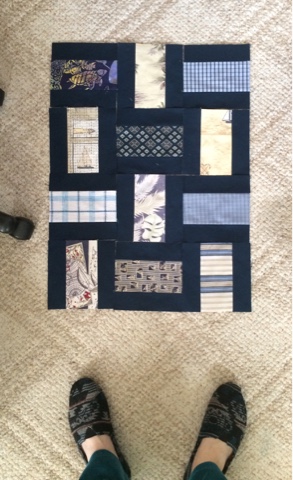 My goal is to have the quilt done by Mother's Day, when my sister-in-law will be here for our annual brunch. I'd be pleased to have her use the quilt while spending time on Jan's beloved sailboat, where they shared many happy hours.
at April 16, 2016 4 comments:

Uninspired title, but things have been busy around here.  The modern quiilt guild I am a member of is putting together an Opportunity quilt to use as a fundraiser.  Two members came up with the idea of making sawtooth star blocks and picked two background solid colors and one focus fabric to be used.  Members were allowed to add additional solid colors as they chose.  The wide variety of stars was amazing--and inspiring.  Three of us met recently to begin to assemble the top after the layout and rearranging had been done at a sew-in last month.  Sarah, who works at a construction company and uses AutoCad, worked on her lunch hours to figure the exact sashing measurements for each piece, then printed out large scale photos of the layout with letter-number markings.  She then cut all the sashing and labeled the pieces from her layout.  Amazing!  I sewed up a bunch of extra stars for some gaps and brought them to the sewing session and Sarah quickly figured out the sashing for those blocks too.  What a great help to have someone capable do all that math. 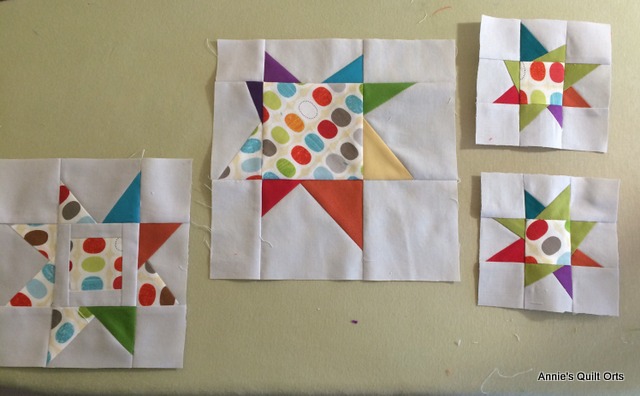 I had fun with the improv construction of these stars--the littlest fraternal twin ones are 4.5 inches and came out so cute.  I made a total of seven blocks for the quilt. 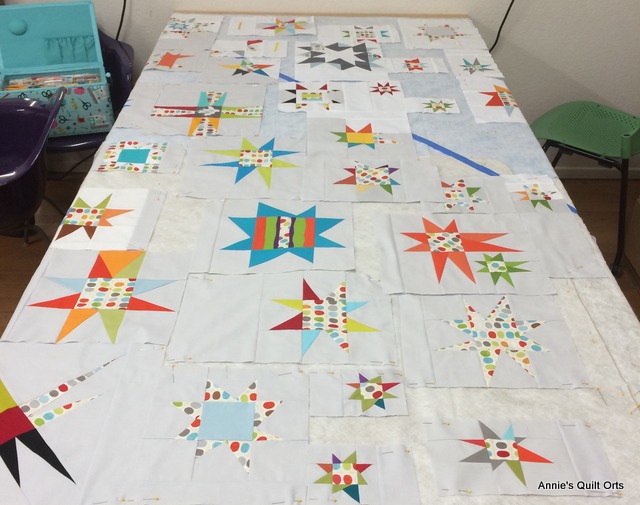 The two background colors are Kona White and Kona Silver and are arranged with a diagonal indicated by that blue tape.  These were pinned to flannel backed vinyl tablecloths as a cheap and portable design wall.  Here they are with one set of sashings completed after the three of us worked most of the day, trimming, sewing pressing and rearranging.  Sarah took this home to add all the rest of the sashing  and plans to have this completed by our general meeting in a week.   Can't wait to see how it looks.

Meanwhile, in my sewing room I've got a stack of fabrics to make a quilt for Hunter, it will be black and white.  I'm currently trying to finish quilting the overdue Timber quilt by this weekend, and am cutting out a memory quilt from my brother-in-law's shirts to have ready for my sister-in-law next month.  On top of that, for guild there is a row by row round robin to work on, challenge blocks, and an ongoing UFO challenge.  Not to mention the eleventy-billion other quilts I want to make, a curtain for the kitchen, wool applique blocks to finish, a cross-stitch to prepare for finishing, and the list goes on.  Not enough hours in the day! 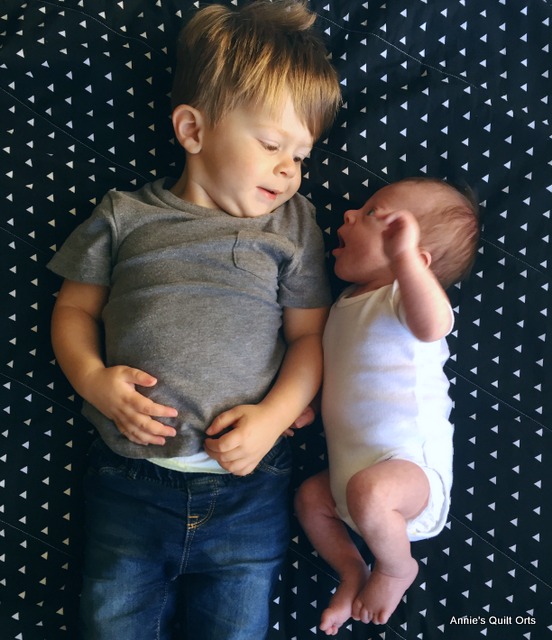 Meanwhile, these two grandsons are drawing us near as often as possible. This photo was for Hunter's one month mark last week, with big brother Cove.  He's growing well and the little family is working things out.  Daughter Elaine will have several more weeks off before returning to her part-time work schedule. 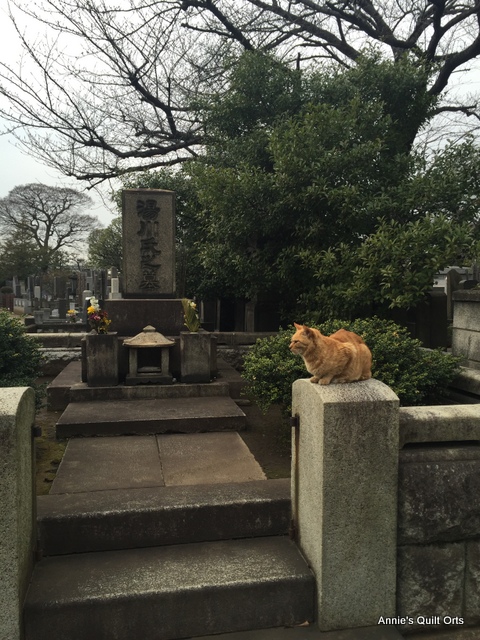 Meanwhile, daughter Erica took a trip to Japan last month with her cousin and they sent me this picture of a cat they found at a cemetery.  They had a good trip exploring some of Tokyo and then taking a bullet train and spending a couple of days in Kyoto.  Erica says she probably never needs to see another Shinto shrine, lol.  She commented on how unfailingly polite everyone they came into contact with in Japan was, greeting them and offering help whenever possible.  It was a memorable trip but she was glad to get home to her own home and cat. 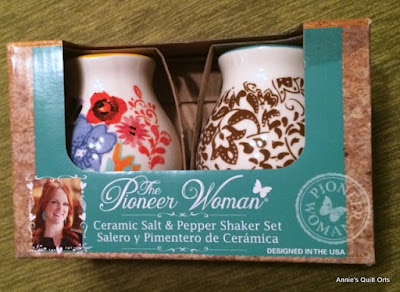 Do you like the Pioneer Woman cooking show?  I think she's a kick but since I'm not a big cook, have never made one of her recipes, though I have pinned them!  I love her new line of dishware, cookware, and now linens for Walmart  These salt shakers came home with me recently and I've picked up some dishtowels and some of her footed bowls. They are very reasonably priced but hard to find in the stores as they are popular, especially the new linens with the buffalo check.  Ordering online is probably the best way to buy them.  And now, off to bed, it's late! 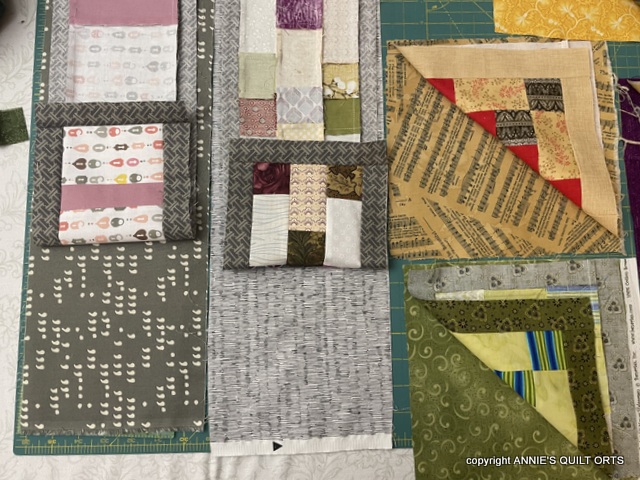