Showing posts from March, 2010
Show all

March 29, 2010
Do you have Cosmic Rules at your house?  You know, the suspiciously regular timing of events despite efforts to the contrary?  Here at Casa de Orts, you always have to eat barbecue at 8:00 pm, you always have to go to the store at 10:00 pm on Sunday night for milk, you always put outgoing mail in the neighborhood central mailbox AFTER the mailhuman has come, the dog never has accidents on the 2/3rds portion of the downstairs that is tile, you always forget you didn't get your gas tank filled when you are in a hurry and don't have time to stop so it's on fumes all the way to work..and, tonight's event,  it is ALWAYS 11:00 pm when you put the topping on the cooling pie.  Of course the pie cannot yet go into the refrigerator because it is too warm.  Which is why I am posting at 11:00 pm because I now have to wait at least a half hour before it can be put away. What I'm making is actually called a Cream Cheese Pie, my one dessert I am known for (cooking is so not my
5 comments
Read more 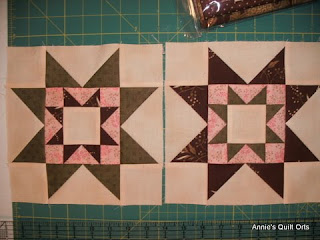 I have a few updates to share.  The first is that Jasmine received the little blogaversary giveaway quilt.  Glad it made it safely to OZ!   She's still in the process of completing a blogaversary quilt of her own. Next, the end of the story about Erica's car accident, remember , when she hit through branches of a huge tree that fell across the freeway and the insurance company said it was her fault, in their preliminary decision?  The stupid adjuster called back with a "final decision" a couple of weeks later, sans Highway Patrol report, and said that they had googled the accident site and that it was a straight road and she should have seen the tree.  Grant was livid and chewed them out some, saying it was dark and impossible to see until too late.  The stupid woman then told him "Well, maybe she shouldn't have been going 65 mph". Unbelievable!  Our agent filed a protest for us.  The insurance company days later then had to recant their "final&q
9 comments
Read more 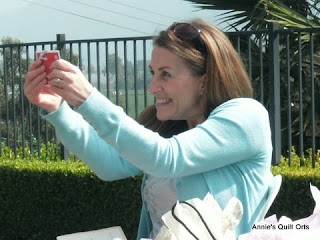 I have a very good excuse as to why I did not post the promised photos yesterday...I left my camera at the bridal shower I attended yesterday!  But that gave me the opportunity when I picked it up to have a private visit with this happy, about-to-be-married woman, my dear friend Tanya... ...who was extremely excited about a Target gift card here.  She was equally excited about the bag I made for her: This was made all from fabric I had on hand, from a pattern called Market Fresh in the December Quilts and More magazine.  The orange print was from the Katie Jump Rope line, as was the brown print band on the inside.  It's a good sized bag, 20 inches wide by 17 inches deep, with a squared off bottom to hold lots of stuff and outer pockets on both sides .  I put a cookbook in there. It took 3 1/2 hours to put this together, including cutting the pieces (twice for the bag front/back when I cut the wrong width! Pesky math again).  The instructions for the straps used midweight sew-in
6 comments
Read more 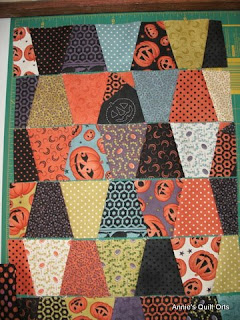 These past few weeks have been very difficult workwise so I am even more eager for the weekends to come.  Luckily I have lots of places to visit in blogland even if I have nothing particularly blog-worthy to post!  I have been ogling Tumbler quilts ever since I made my Halloween one last year.  A reminder: This is not the finished project but shows the fabrics from the charm pack I used (which was several years old at that point).  The tumblers are 3" finished and I used an acrylic template I bought at JoAnn's Fabrics.  That set me on a course to cut up a lot of my scraps with the tumbler template.  Tumbler quilts kept catching my eye, such as these beauties: http://auntiesquaintquilts.blogspot.com/2009/11/tumbler-quilt.html  made from a single line of fabric http://cvquiltworks.blogspot.com/2009/11/feast-for-your-eyes-on-thanksgiving-low.html    A batik beauty--scroll down for the selvage tumbler quilt! This cute child's one with rick rack trim http://caraquilts.bl
8 comments
Read more 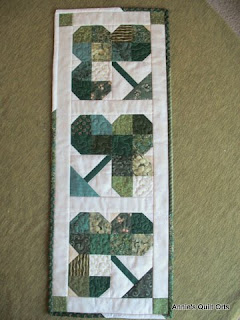 Thursday night I stayed up late completing the shamrock office-raffle project.  I decided to make it a "real" quilt by binding it instead of doing a stitch and turn.  This was a no-extra-cost project, as I used leftover binding and strips, leftover batting, and stash/scraps.  The colors are so much warmer in real life!  I took this in mid morning on my dining room table so maybe that accounts for the poor coloring.  I love a pieced backing!  A little closeup of the quilting.  I stitched around each block and the shamrock shape and stem.  I'm calling this a tabletopper since I did not put a hanger on it.  It was really fun to make--and hard to give away!  Especially since green is my favorite color.  My cubicle-mate won this and she promptly put it back up on the divider between our desks.  Congratulations, Yadi! This is the one I made for myself--I finished it this afternoon and took photos.  The colors are much truer in these shots. I told the story of the little st
7 comments
Read more

A plan and some shamrocks 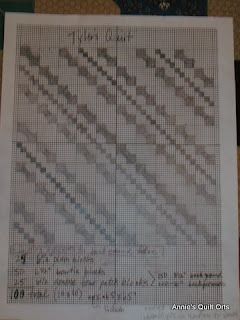 My older brother is turning 50 this year and asked me to make him a quilt.  Of course I agreed, since I made our other older brother a quilt in his 50th year too.  My brother Tyler is a traditional guy and requested traditional colors, nothing loud or girly.  He also mentioned he has a king sized bed.  I told him I am NOT making him a quilt that size, however, it can be a good sized throw.  I cast about for a simple, traditional pattern and decided on bowties, a la Finn .  I chose 6 1/2 blocks since I knew I wanted to have 50 bowties, each a different print--for me, scrappy is best!--and these are easy to cut from leftovers.  But what to do for the setting?  Hmm, pondering.  Graph paper and pencil came out.  I tried some of the more traditional settings, but in the end this plan appeared (ignore my poor picture taking skills, yet again) I liked the asymmetrical setting but still ending up with 50 bow ties.  I thought the double four patch blocks added a bit of interest.  My original p
5 comments
Read more 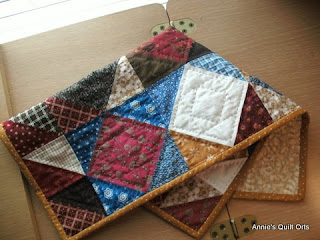 I love that expression--so much more fun to say than "some stuff'"!  My quilty activities this week included sending off three things in the mail: The blogaversary giveaway quilt got its plane ticket to Oz and is flying to Jasmine in Victoria, AUS, complete with its caramel binding and the patterns.  Jasmine is also celebrating her first blogaversary and has a giveaway of her own.  Find her beauty of a quilt here and tell her I sent you! These Jewel Box blocks were sent off to New York to a member of the quiltbiddies--a Yahoo Group I belong to, for a swap she is hosting.  Can't wait to see what returns to me!  These were made from my scraps/stash, with the exception of the background.  White was the specified color and it is not one I usually have on hand as I tend to prefer cream or off-white. Also sent off was the quilt for my nephew John, who turned 1 on March 3.  Hmm, this pic is not of the finished quilt. Here it is!  My sister in law called me to say it wa
5 comments
Read more 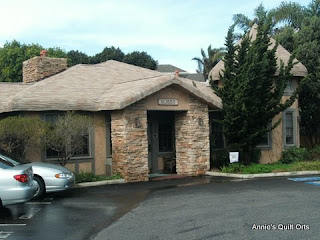 Grant and I got away for the weekend, just up the coast about two hours, to Pismo Beach.  It was wonderful to relax and enjoy a couple of days without work or other obligations intruding into our time together.  By coincidence, a good friend of Grant's and his wife were also celebrating their anniversary by weekending in Pismo and we got together several times, which was fun.  It was overcast on the way up, perfect for driving, and rained hard Friday evening, night, and Saturday morning, but then the weather was perfect.  Cottage Inn by the Sea Our room had two king beds!  We had a peek-a-boo view of this: This pic of Pismo Beach Pier above was taken from the lovely garden at the foot of the Inn's property. The succulent garden was gorgeous! Someday I'd like to do my frontyard over like this.  After breakfast we drove the mile or so to downtown Pismo. We were at about the point of the last palm tree on the left, going to the boardwalk and pier, when a familiar looking wo
10 comments
Read more
More posts