Almost forgot to post Orts today!  I'm a bit off kilter with the institution of daylight savings time.  That's as good an excuse as any... 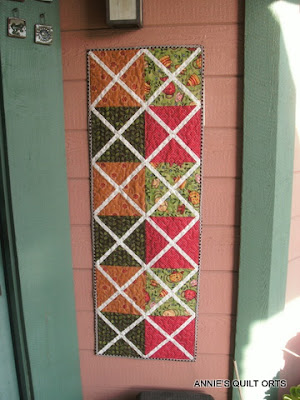 It looked pretty good modeling on my front porch.  I had a stand-in supervisor for this task: 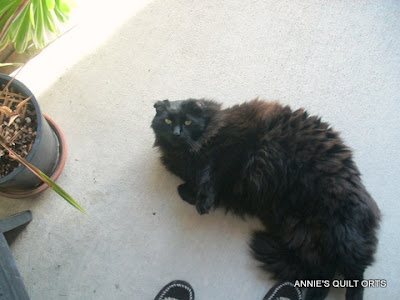 This is our next door neighbor's cat, who showed up as a stray a year or so ago.  She must have had a Scottish Fold parent as her ears are deformed.  Sweet cat--lets the boys haul her around and always comes over to say hello when I'm outside.
Posted by AnnieO at 10:33 PM

I seem to get stuck doing a lot of admin tasks at work probably because Im really good at orgaising. Ive decided to become really bad at them and see if that stops the requests.

I labelled a quilt once. It wasnt so bad....

Love the sweet cat. Does she have a name? I adore that runner, I can't speak of labels (hall of same) and the commercial conspiracy on the radio is real! hee.

Love your music choices. I do not like doing labels. I admit I have several quilts without them. Pretty table runner. BIG kitty.

Finally a quilter who admits to love good old ROCK Music ;-)) When I need to get into the groove, I play the same kind of music - loudly. Till my husband complains or the cats run away ;-))

OH my gosh...your traffic rant was hilarious...so true!
We seem to have similar tastes in quilting music!

I agree with your commercial break radio conspiracy theory. It's so annoying. I like Queen and Fleetwood Mac, they are loaded on my IPOD Nano for my alone time enjoyment!

had to laugh at the traffic rant and think you're spot on with that observation~!

the runner is fabulous too~!

I'm glad you described the cat as "sweet." With those unusual ears, I thought maybe it was an attack cat or a cat from the mysterious beyond.

I'm a member of the "quilt label police" (but you live far enough away that I won't show up at your door). I've heard so many sad stories about people who know nothing about the loveliest family quilts. I'm a label enthusiast, always pushing to see my friends' labels in place. (late is better than never).

WOW girl.....how could you bare to part with that simple fabulous table runner??!!

(I hate labels too)