Projects, I've got many.  The top project since the Cross Reference finish is now the Moda Love quilt for Emma, my friend's daughter.  The top is all sewn together. 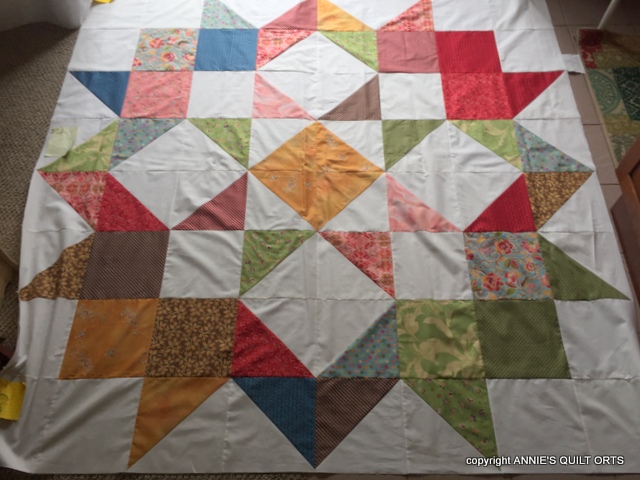 It's big, and barely fit between my sewing desk and the kitchen cabinets for this shot.  It was a pleasure to sew with big blocks for a change.  In the interest of using up stash, I've chosen some yardage and leftovers to make up the back.  I plan also to construct a Frankenbatt  of the leftover batting in the bin I can barely close. (I stole the name Frankenbatt from another blog--don't remember which, though!) 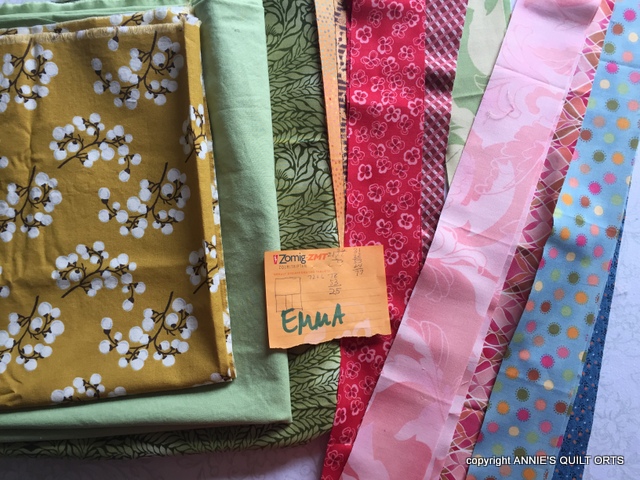 While disparate prints, I think the colors work with the fabrics on the front well enough.  Strips cut from the fat quarters will make up the binding.  I plan to sew them in color sets for an easier-on-the-eye effect.

Over the weekend my sister and I went to the Conejo Valley Quilters Guild show and they had some really nice vendors there, including several local quilt shops.  From the booth for A Fabric Shoppe, I chose a bunch of dotty fabrics in soft neutrals for a baby quilt. 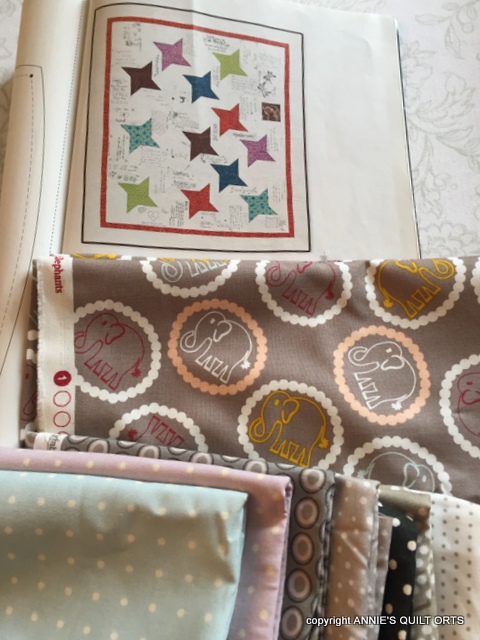 This is for a daughter's best friend who prefers neutrals.  I had the backing fabric in stash and think it will work well with the dots.  My plan is to make only the center of  this quilt with no borders, as a Tummy Time or take-along small quilt.  The pattern is from APQ magazine April 2017.  The designer had signatures from friends and family on her version, which will be a solid in mine.  Should be an easy make!  Baby is due in November, but I believe a baby shower is planned for next month, and I'd like to have it done by then.

Final project is a challenge.  I don't think I've mentioned yet that my sister and I will be going to Sewtopia in New Orleans in early November.  I signed up for the Michael Miller Challenge and fabrics arrived a few days ago. 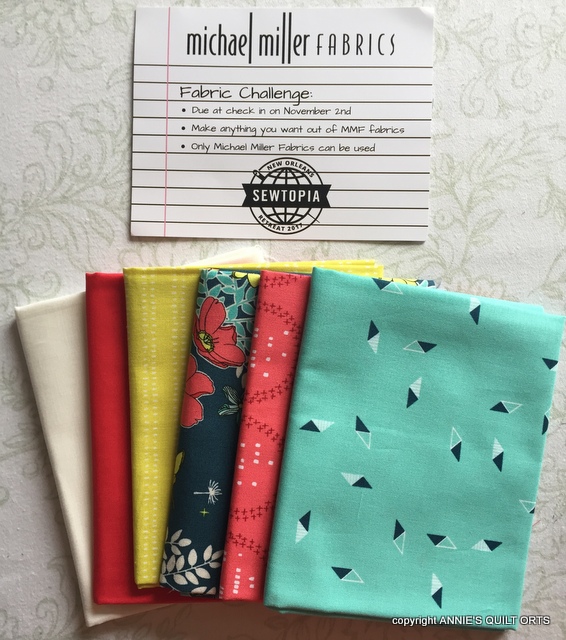 Aren't they yummy?  I've no idea yet what I will make. Being still a newbie to the Modern Quilt world, it's a little intimidating, but I'm so looking forward to my first sewing retreat.  Our guild president and her mom will also be there, which will make me feel a little more comfortable. I'll also be participating in the gift swap and need to settle on what small item to make. I've never been to any southern states, and anticipate loads of picture taking. Fingers crossed for no storms!


In the wins department, Jodie of Ric Rac released her latest fabric line, Rock Pool, and I won a giveaway on her blog last month.  She sent a loverly parcel all the way from Australia.  Lucky me! 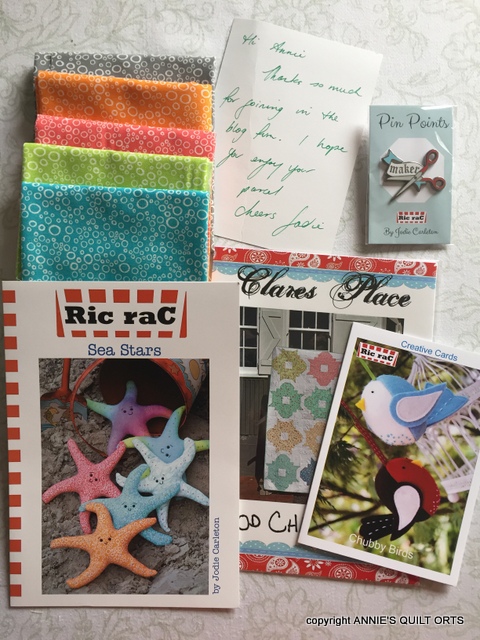 Jodie is a prolific toy maker and relatively new but fabulous fabric designer and I've followed her blog for many years.  The patterns she sent are adorable.  Love the pins she makes too, some of which are sweary, heehee. Many thanks to Jodie for the great prizes.  I'll enjoy playing with the fabrics and wearing the Maker pin.

Right-o, off to get dressed and run my errands before work.  Thanks for visiting!

Lots of yummy eye candy in this post! I'm not usually big on neutrals, but that baby fabric pull is gorgeous...

I am really loving that big block quilt! Gotta make it!!
That is a pretty group of understated fabrics for the baby quilt. Nice pattern choice, too.
What a fun package you won.

Phew! You're going to be busy.

Moda Love looks great! The fabrics for the baby quilt are so cute. I love the elephants. Happy stitching this weekend. You've definitely got some fun stuff to play with.

Gosh Annie what a great post...love Emma's quilt, nice to work with big blocks and love the term "Frankenbatt" - always good to use up those odd pieces of batting. Some shopping at a quilt show is always fun - love the baby quilt fabrics and pattern! The trip to New Orleans sounds amazing - looking forward to some pics of that! .....and a parcel from Jodie - lucky you!