My sister and I had a grand time at our first quilting retreat, Sewtopia, which was in New Orleans this year.  We had our usual adventures getting to the airport and hotel, but all was well in the end.  I may have a few more gray hairs, however. We arrived the day before the event's start, and had a short rest in the hotel room before venturing out for dinner.  Kathy was mad for trying creole/Cajun food, and forced encouraged me to join her.  Over the four days I tried shrimp creole, gumbo, catfish, jambalaya, etc.  She was mostly pleased, but being a very good cook herself, a little disappointed at the tourist versions of these usually spicy dishes.  Sewtopia provided lunch daily in the hotel dining area (Embassy Suites on Julia Street), in what was once obviously the exterior of two buildings that became a huge atrium painted with Bourbon Street scenes, with life size statues scattered throughout. 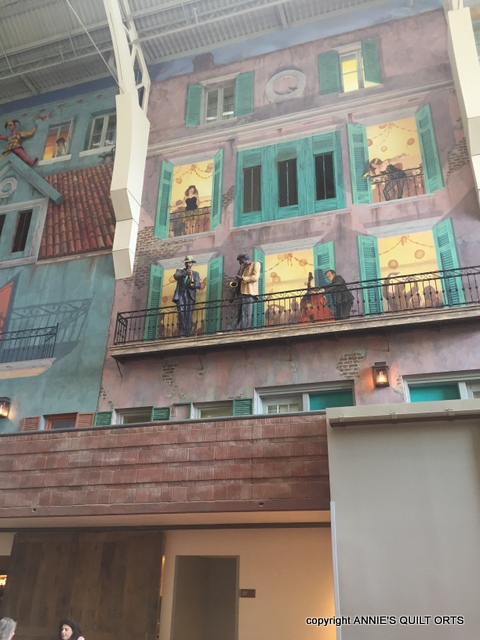 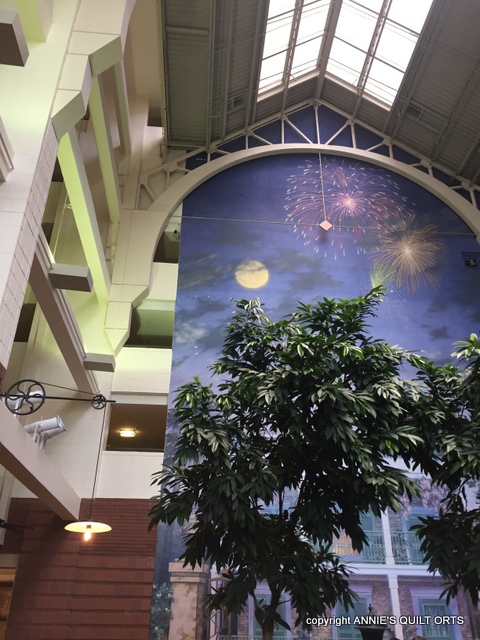 Our first morning of Sewtopia included a shop hop and, to my surprise and joy, a tour of New Orleans by bus.  Our first shop was in the Lake District, Mes Amis Quilt Shop. Tiny but chock full of great fabric.  I purchased some yardage and fat quarters with fleur de lis for my word quilt project, then headed out to take photos of the neighborhood.  Along the way I met other members of the group who told me Lake Pontchartrain was a short walk away. 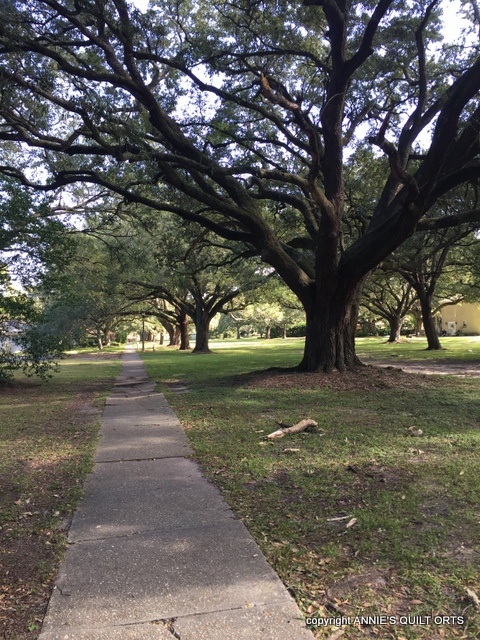 The Lake Vista neighborhood was full of large houses from many eras, with these large old oaks between them. I loved this yard with multiple tree swings: 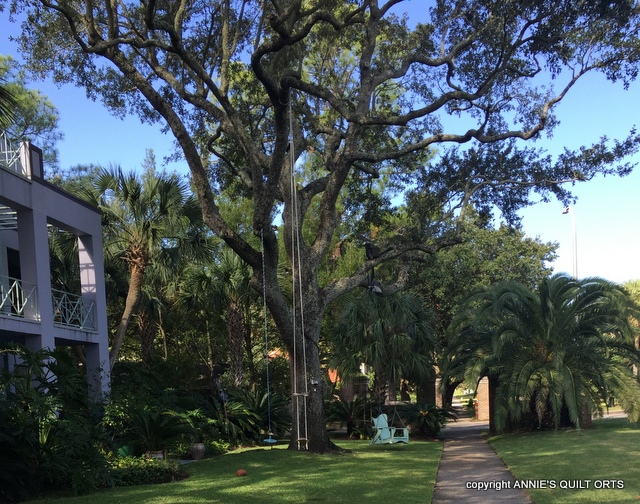 Wouldn't you love to spend time in this one? 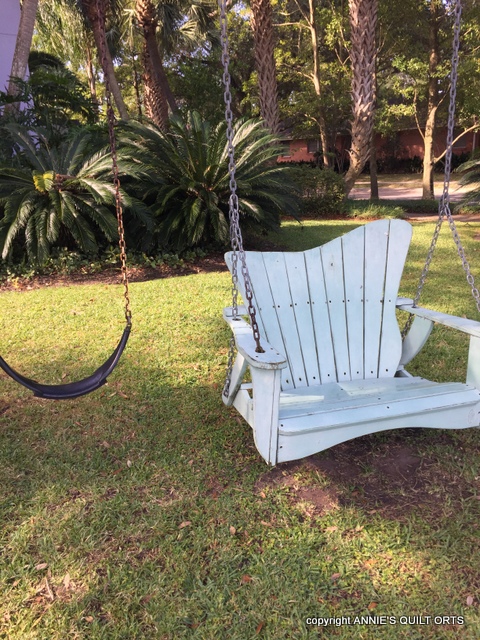 The lake is surrounded by a levee and not actually visible from the sidewalk by the homes.  I headed up the slope to take photos of huge Lake Pontchartrain. 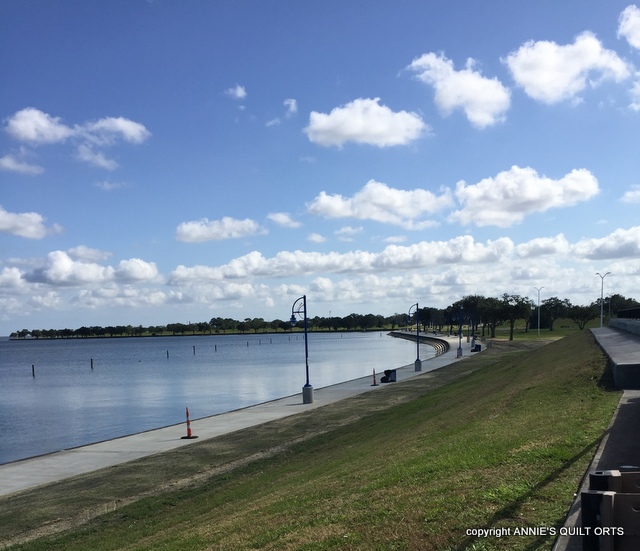 It was a very pretty day with the clouds.  We were lucky with weather and although warm, in the low 80s, it was not very humid.  Not that we didn't appreciate climbing back on the air-conditioned bus to our next destination in the Mid City area!  Morning Call was not a quilt shop, but a very old restaurant famous for beignets and chicory coffee.  It is in the middle of beautiful Audubon city park with stream, sculpture garden, museums, and surrounding older neighborhoods.  I could have spent hours there, but made the most of the time we had. 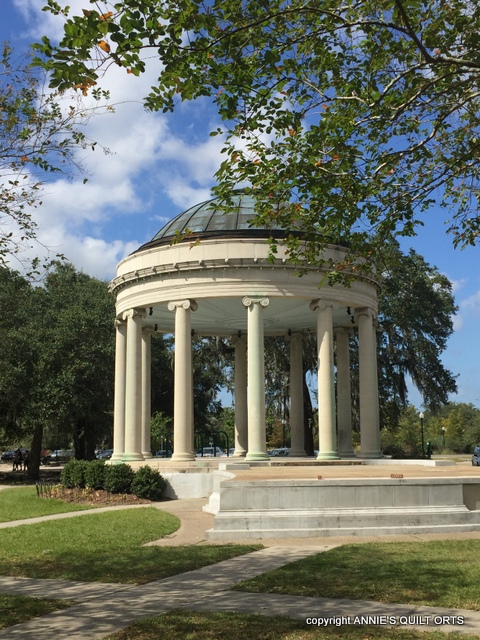 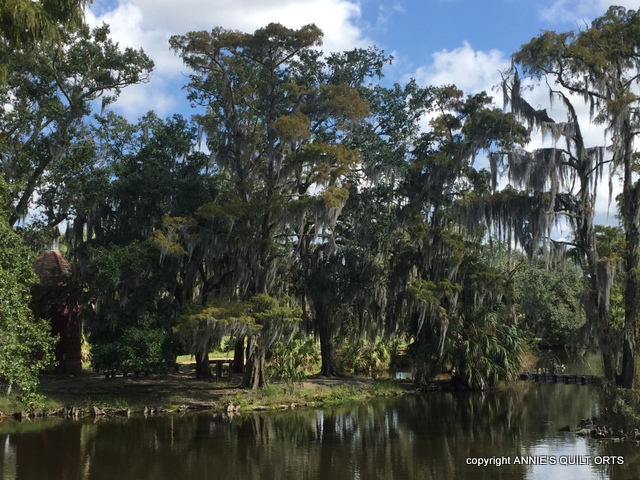 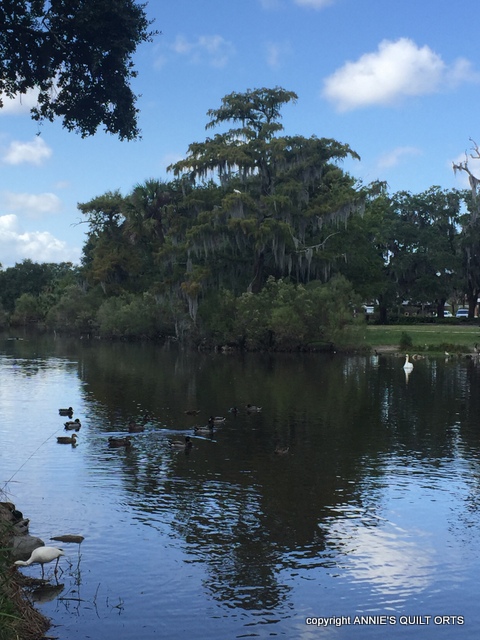 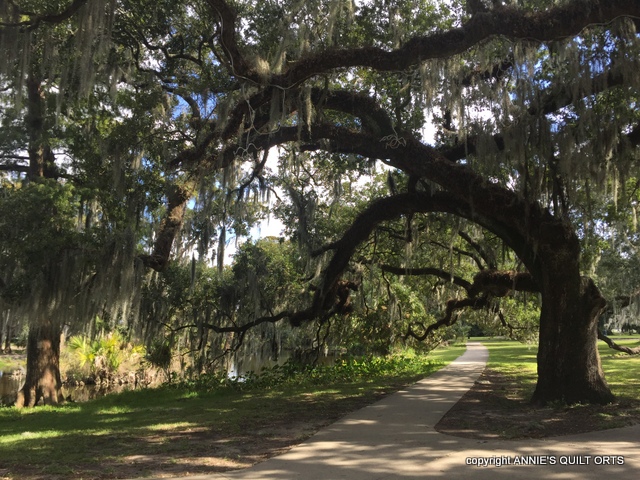 I adored the oaks covered with moss, this one with branches arching nearly to the ground. 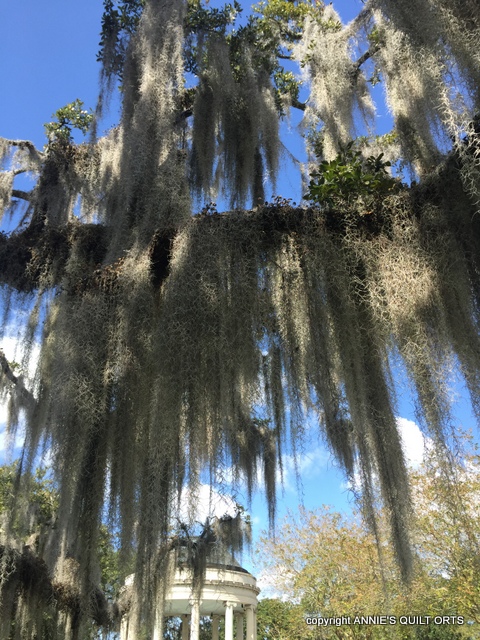 While we have many oak trees in California, few of them have Spanish moss and never to this extent, in our dry weather.  After a few minutes in the sculpture garden, we headed to our final stop, a quilt shop called Chateau Sew and Sew. 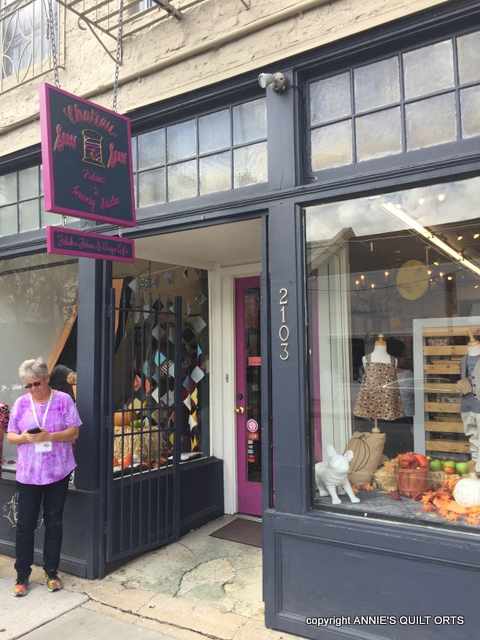 Very cute shop with tons of Cotton and Steel and other modern fabrics, along with gifts and patterns for kids.  I did a little buying of fat quarters and then my sister and I headed out for some neighborhood shopping.  I bought a handmade tile from a craftsman and a needlework Shotgun House scene from a shop owner named Annie. 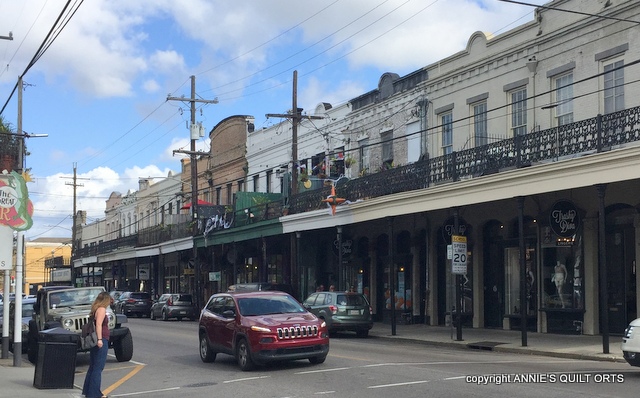 Loved all the railings and different roof lines of this old part of the city close to the Mississippi.  After returning to the hotel and a short rest, the cutting, ironing and sewing began in earnest... 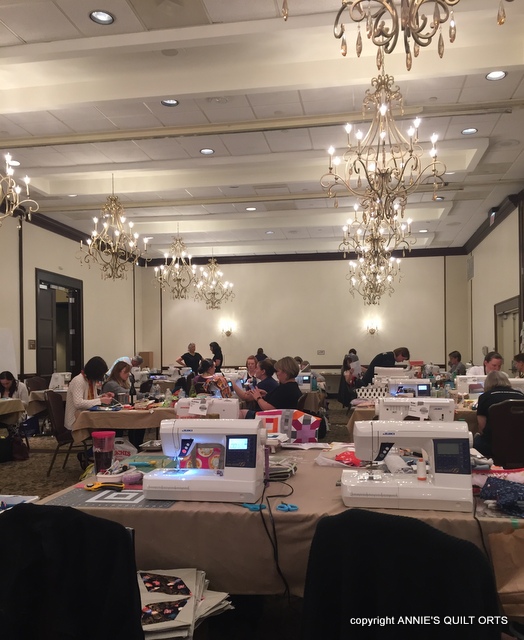 ..in the Sewtopia Ballroom, of course!  Sewtopia provided Juki machines for those who had reserved them.  I was late to register so ended up bringing my machine, for which I received a credit in the Pop Up shop.  But more about that in the next post :)
Posted by AnnieO at 11:49 AM

Having spent 3-4 months in New Orleans this year, your photos are so familiar. I really like Mes Amis quilt shop, too. Very friendly, with a great selection of NOLA themed fabrics. That's the place that tears all their fabric instead of cutting, right?

Fabulous pictures, sounds like you had a great time.

Looks like an adventure. I have never been to that part of the country--lovely scenes you shared.
Was this a sew-what-you-want retreat, or are you all focused on the same project?