Since my last post, the Thomas Fire has made it's way through nearly 274,000 acres of Ventura and Santa Barbara Counties, and has the dubious distinction of being named the largest fire in California history. Over 700 homes were destroyed (500+ in my city), many others damaged, and thousands of acres of ranchland and orchards with beehives destroyed.  At one point there were over 8500 fire personnel on this fire; by today it has decreased to somewhere in the 2000s.  It is 65% contained and still a dangerous threat due to the severe dryness and Santa Ana winds, with no rain in sight.  They are hoping to have the fire 100% contained by January 7, which does not mean put out!  Sadly, one San Diego firefighter died while fighting the fire in Fillmore.  We watched on TV the transport procession and all the firefighters, first responders and residents lined up on every freeway overpass and roadside honoring his terrible loss. 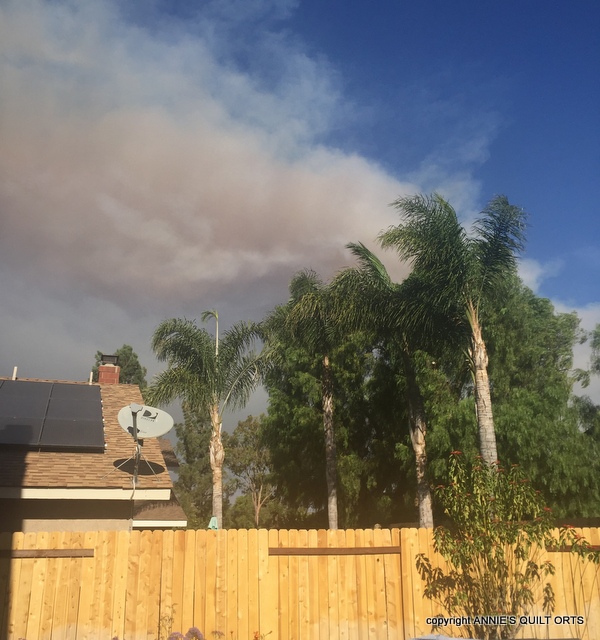 This picture was taken 12/14 when there was still a lot of active fire in Ojai.  Air quality was very poor for many days, primarily at the western edge of the city as the fire moved up the coast. Masks were necessary.  Every day at work we are seeing patients who either lost a home or had relatives or friends who lost homes.  Evacuations have been lifted but many cannot return to their homes yet.  Today we heard of evacuees having to seek rentals in nearby cities as there is little available in town.  My city has responded "Ventura Strong", with the community banding together in a most admirable way, and look forward to rebuilding, but it will be a long process.


Life has gone on for those not as severely affected by the fires, stores have reopened for holiday shoppers, and planned community events allowed to proceed.   My Bunco group gathered for the last game night of the year.  I made this little topper to include with a bottle of wine.  The backing was the same tree fabric. 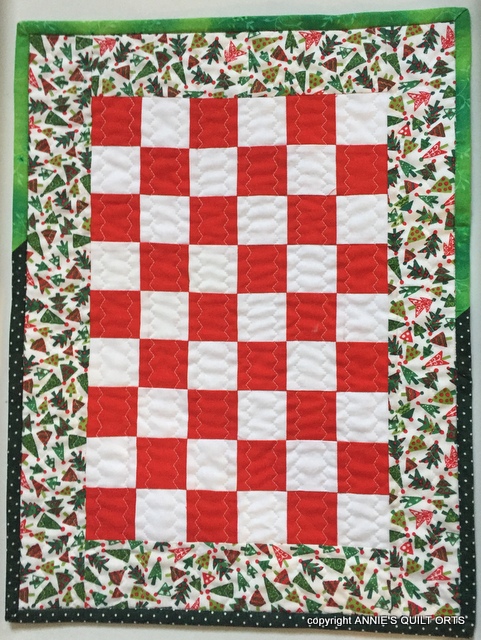 I've also been working on stockings for our grandsons.  Fabrics are from the Merrily collection by Gingiber. 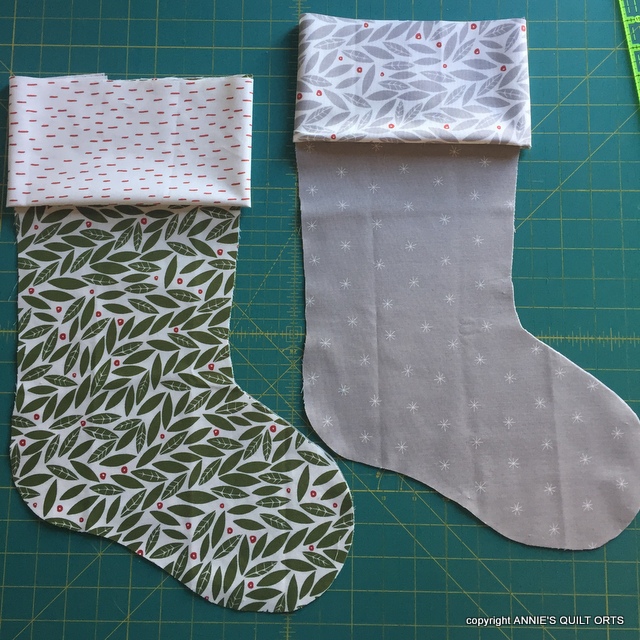 I found the pattern HERE. I chose this pattern as it included both lining and batting, giving it a lot of body--but also multiple thicknesses to stitch through.  I've had to do some fussing with the seam allowances and one stocking is in timeout.  Some mini pompom trim and an initial will complete the stockings--I'd like that task to be done tomorrow. 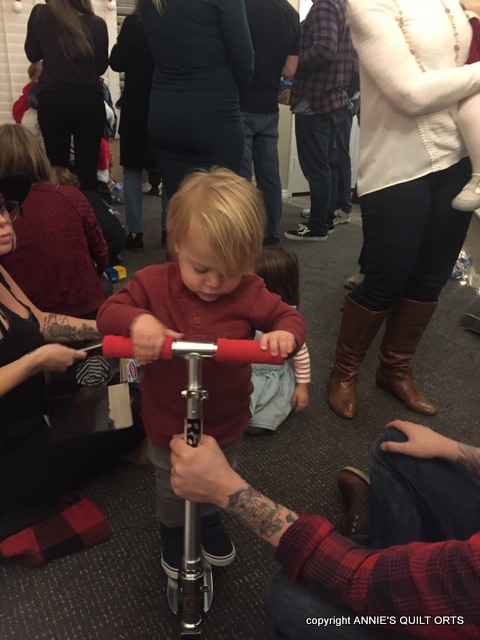 Meanwhile, Papa and Mimi were invited guests for the daycare providers' annual Christmas program.  Kim, the wonderful daycare provider, pointed out that due to the fires they lost a week of practice, so the singing portion was mostly bedlam, but very entertaining.  Afterwards, presents were handed out.  Santa scared Hunter, but once safely away in his daddy's arms, he was eager to try out brother Cove's new scooter.  Hunter received a Little People Barnyard he loved.


As usual, I am behind on everything holiday, though I did get the house and tree decorated and some gifts bought.  Last Minute seems to be my M.O.  Once again, no Christmas cards have gone out as yet, but we enjoying receiving them, especially the ones with pictures of friends and family.  Our son Nick is in Italy with his girlfriend, Ashley, and this is the latest photo he sent. 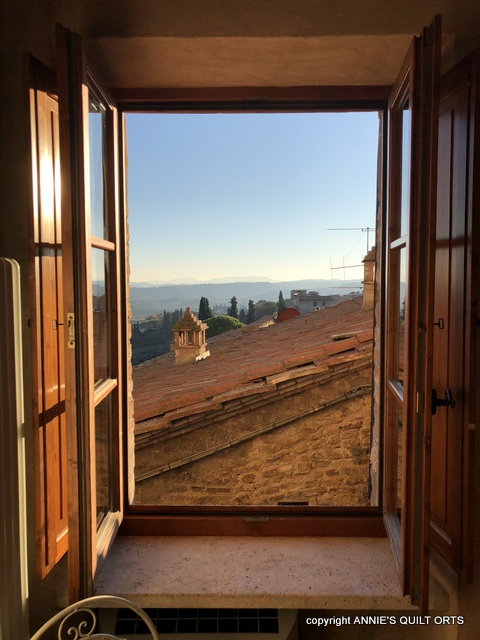 This view is from their Air BnB in San Gimiginano.  Amazing!  While we'll miss them at Christmas, we'll enjoy hearing of all their travels when they return.

I may not get back on the blog as the mad rush swallows the next couple of days, so let me thank you all for visiting my little blog this year, and wish you the happiest of  holidays.  Cheers!
Posted by AnnieO at 10:34 PM

Cute topper and stockings.
Have a very Merry Christmas!

So good to see your post. It was a timely reminder to be grateful for all my blessings.

So glad to hear you are OK! Merry Christmas!

Merry Christmas...glad to read your post and know that you're fine.😊

So glad you are well and carrying on. Good to hear those good containment figures. At Safeway this mornuing, I met a local fire fighter who was just back from SoCal. He gave me a report on our guy who broke his leg in SoCal. He is doing well. At some point will have the pins, etc removed. They and all y'all, including the weather, have been in our prayers regularly. It is difficult, but Christmas happened, and so in the midst of it all, I'm wishing you all a blessed and peaceful Christmas.

Merry Christmas to you and your family! Sometimes it seems hard to celebrate when others have lost everything. But finding our peace and happiness gives us the strength to regroup and then go out into the world, helping those who need it.

I had forgotten that you live north of LA. Glad to know you are safe.

Glad to hear that you and yours avoided the worst of the fire. It's been heartbreaking to watch on TV. The stockings are very cute, perfect for two little boys. Hope you had a wonderful Christmas holiday.