Weekends Are Too Short

Another weekend has flown by.  I did get some sewing in, saw my grandsons, cleaned up some areas, and did a bit of shopping.  It felt good to get some things done after last weekend when I was sick.  Amazing how quickly your energy level falls when you don't eat or move around much.   That weight I lost? It came right back :(.  But my husband and I are working on adding exercise to our week, he at the gym and me with walking, eating fewer carbs, more fruits and veggies, and just generally less of everything, especially added sugar. 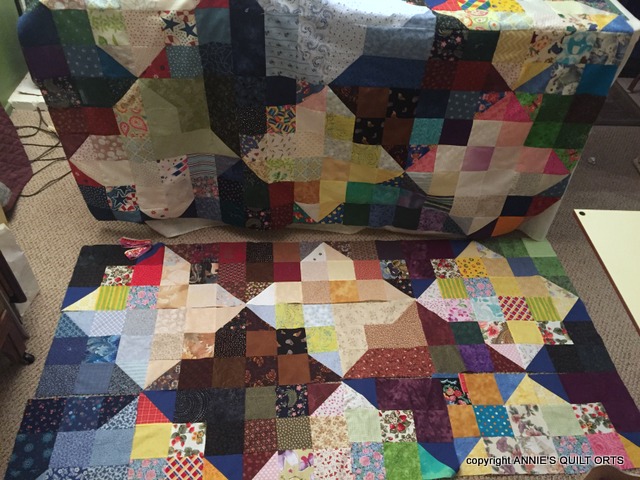 I got two more rows put together of Perkiomen blocks for  a Thomas Fire quilt.  Imagine please that these two sections were joined... 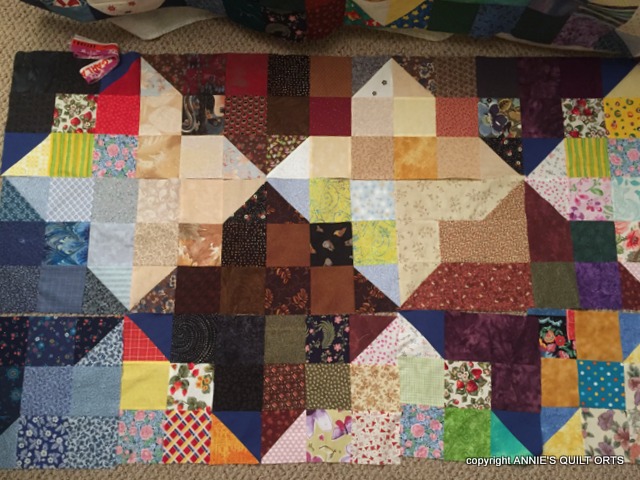 But alas, the last row is still incomplete.  I'll work on these tonight and get the top finished, as there are only these three rows to add.  Our guild efforts have been so successful in receiving donations that we are overwhelmed and looking for someplace to store it all!  What a wonderful problem to have.  We have another sew in next weekend and I'll be attending that.  I hope to have a quilt to bind by then.

The cries of joy heard all over Santa Barbara  and Ventura County were because they reopened Highway 101 in Montecito this afternoon, after hundreds of truckloads of mud and debris were scooped up and carted off day and night for at least 10 days.  A lot of the mud was dumped on the beach and will be absorbed by the surf.  Many more truckloads ended up at our Fairgrounds to be combed through.  There are still two people missing, though a third missing was found, a 21 year old girl who died in the mudslide.  All the offramps in Montecito are still closed, and the mudslide areas forbidden to lookyloos as search and recovery goes on.  We hope the bodies of the last two missing, a 2 year old girl and a 17 year old boy, will be found soon.  No big rainstorms are predicted in the near future, thankfully.   Our guild will keep making quilts, as many as we can as fast as we can, to try to give some comfort to survivors.

I watched my grandsons last night for a few hours. So great to be able to do that often. 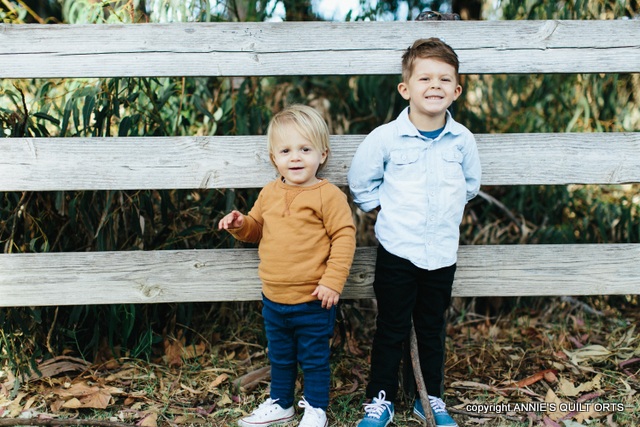 This is their Christmas card pic, Hunter on the left, big brother Cove on the right.  Boy, Cove sure knows how to stretch out bedtime.  After a long book, and his traditional bedtime song, he had a question about "why some dinosaurs didn't die in the mass extinction".  He actually said that, at not even 4 years old!  So we explored various scenarios as to why some "feathered" dinosaurs made it, and also mammals.  I think it was after 9 o'clock by then.  Then he came out of his room 3 minutes later to ask Mimi "why sometimes you have bad dreams and sometimes you have good ones"...deep thoughts from the great staller.  Finally all was quiet.  Too funny. 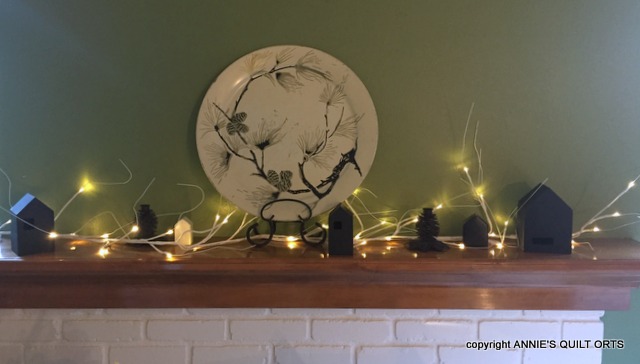 Here's the (not too terrific) photo I promised of my mantel with the Nesting House Set from the new Magnolia collection at Target.  The little white house and smallest black house are actually a set of salt and pepper shakers, but I like them here.  The large vintage painted metal tray I found years ago at a resale shop downtown.  I love it.  Okay, off to fix dinner...
Posted by AnnieO at 6:16 PM

I think you get a lot accomplished with everything else you do. That's going to be a beautiful quilt for someone. Do you remember when Moda did the Just One Star drive? They were totally overwhelmed as you guys are now. But it's a good overwhelmed. Soon hopefully all will be back to normal once more.

Those blocks are making a great looking quilt! I appreciate you keeping us posted on what is going on in the area. Once the fire is out it doesn't make the news out our way anymore.
Those little guys are charmers, and it does sound like someone has acquired some pretty sophisticated manipulation skills at a very young age. :)
Really nice looking display. I have a hard time putting all the lights away at Christmas time. I like a little glow in the house. I still have the alpine trees in the solarium, with white lights on them. And then there is the strand of snowflake lights on the hutch. I'll probably put them all away the end of this month.

Aw, such cute boys! "The Great Staller" made me laugh! Certainly he's a deep thinker :)

I really like the layout of your Perkiomen blocks. I hadn't seen them oriented that way before. Love the dark/light contrast. I'm sure those quilts will provide lots of comfort to those who need it!

I am originally from L.A. and most of my family still lives in the S. F. valley there. I have been heartbroken with the fires and then the mudslides. I was so worried about the mud after the fires and it's horrible to think this is what has happened. My sister lives in the hills and has had to evacuate a few times before, but has been one of the lucky ones without damage. Ventura is one of my favorite places to visit when I come home. My heart breaks for those poor families, especially those with still missing loved ones. Thank you for the work you are doing because I know this is a huge endeavor that is personal for all of you as well. I love the bright colors of your Perkiomen blocks. I sent in a bunch a few weeks ago and can't even fathom the number of quilts you are pulling together!! From friends in the area, I have learned that the community has all pulled together. Hopefully that spirit will continue into the weeks and months ahead when recovery is happening. Bless you!

I agree, weekends are too short. Looks like you got in some great stitching time last weekend. It's good to hear they are making progress with the clean up. Your community has definitely not had a great few months. It's hard to imagine recovering from all the damages and loss of life. Enjoy your sew in this weekend. It seems such a small thing to make a quilt, hopefully they bring a small amount of comfort to those affected.

You are working on a good scrap busting quilt design.

You are so correct. I took Monday off just so that I could complete the quilt, take pictures during the day (limited daylight hours) and blog about it. Your grandsons are handsome little angels. The quilt is coming along nicely. Yes, I can picture the two pieces together.
I will wait till second week of February to mail mine so that I can include the contribution from my guild members.