Friday I left work a bit early so Grant and I could have a date with Paul Rodgers.  Well, there were several hundred other people there too, but it was still just the two of us together.  We drove about an hour and a half north to the Chumash Casino Resort in Santa Ynez.  The Indian casinos are everywhere in California now and are hugely popular.  The Chumash were the Native Americans who lived in much of the Southern California coast when the Spanish explorers arrived in the 1700s.  It was a beautiful drive along the coast from Ventura to Santa Barbara, then we turned inland over the San Marcos Pass.  We took this road home from our trip to Pismo Beach for our anniversary in February and I shared this picture: 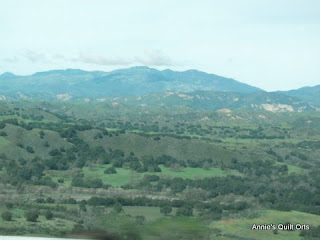 It was very green and lush in February, which is typically our rainiest month.  This is what it looked like on Friday, four months later: 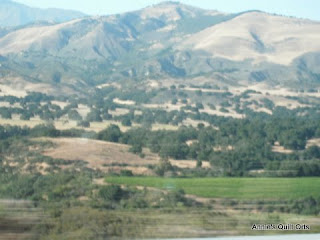 All that green has turned golden and dry and the deep green of the Coast Live Oak trees really stands out. 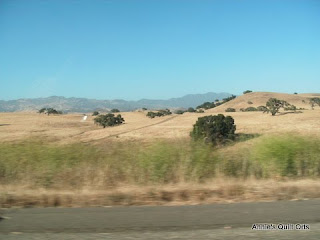 It has not been too hot yet but the fire crews are all tuned up and we fervently hope that they don't stay very busy this year.
We ate at a steakhouse in the quaint little downtown and then filed into the smoky casino for the show.  Luckily there was no smoking allowed in the theater.  Paul Rodgers, of Bad Company and other bands, known as 'The Voice', still has it going on at age 60.  It was a great show, though of course too short for all the fans.  Grant and his bandmates cover several of his songs in their playlist, such as "All Right Now" and "Bad Company".  It's great to see live music any time, especially great rock and roll!  Grant and his bandmates have a chance to play at the County Fair this year.  He should hear in a few days if they made the cut.  It would be great fun to see them sing these songs in the open air bandstand at the Fair!
Posted by AnnieO at 10:43 AM

I used to love Bad Company way back then (a year or two ago). I went to see Spandau Ballet recently, not quite rock and roll, but great nevertheless.
Fingers crossed for the dry season.

Sounds like you had a ball! I remember Bad Company from my late teen years(now I'm showing my age huh?)

Let us know if Grant's band makes the cut because then I can brag I know famous people.

Sounds like you had a great time. Boy, it is amazing what a few months can do to the landscape. Hope Grant hears some good news!

Oh Annie how totally rockin' cool. On all accounts. I enojyed these varied photos. What a great perspective on the rapid changes your area goes through. Thank you for that! (being from California myself, northern, I'm always interested). Now, onto Grant and his bandmates. I am sending a prayer and wings to y'all so they might have an extra bit of help to make the cut. Little no-name does so as well. hee!

How fun! What a great time you had. I wish Mr. Hive and I got out more.

Wow what a difference a few months have made in the view! Hope the fires are few and far between this year.