See why I should never mention fire? We've had our first one of the season, and it was of the beloved landmark hill behind Ventura, Two Trees, so named because of the two Coast Live Oak trees gracing it.  I noticed the smoke on Friday when I went to lunch about 2 p.m.  Later there were helicopters and planes making water and retardant drops (photos courtesy of my mom). 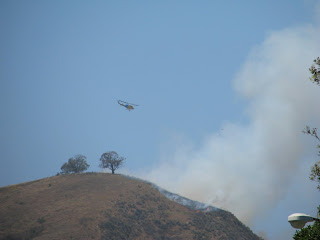 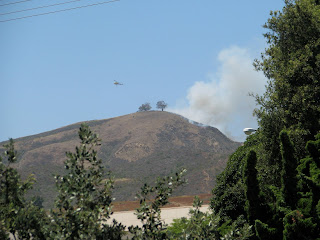 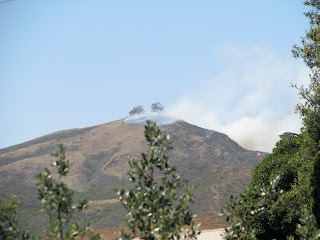 This fire was started by a 16 year old who was hiking with some friends from a local park and "found" a lighter. Stupidly he decided to see if it worked and the fire got started accidentally.  He tried to stomp it out but couldn't so called 911 and then warned some other hikers nearby about the fire.  There were 150 firefighters who battled the flames for about 4-5 hours until it was out, with some staying overnight to make sure there were no hotspots to flare up.  The 16 year old was cited by police and released to his parents. The trees were not damaged but there is an ugly black scar on the hill now--14 acres were burned.  Just a reminder of what a little idiocy can cause.  This land is all private property, hard to get to by vehicle as there are no direct roads.  There are gates and warning signs to keep people out, but obviously that doesn't stop them.  At least they should bring their brains.  I'm sure the youth did not mean to do what he did, but lighter-plus-dry-grass-equals-fire in a fairly linear fashion.  So be careful out there, people!
Posted by AnnieO at 9:31 PM

We just had a large fire in the area because of people burning trash on a high fire danger day. I just can't believe it sometimes. By the way, I love the quilt in the previous post.

More likely the teen was smoking but didn't want his parents to know. Who "finds" a lighter in dry, grassy, private land?

Glad they were able to get it under control.

Hmm...16 year old and a lighter in an out of the way place. Wonder what he was up to?!? So sorry that you had your first fire, hope it was the last. It is such a shame when the beauty of nature is ruined. It is frustrating that so many folks do not see the beauty of our earth and treat it so carelessly.

Oh..Oh...I know you guys are always on constant watch for the fires. This is just terrible....but I'm with the other commenters...he found a lighter and wanted to see if it worked.....uh...yee-ow!!!
I am soooo glad they got it under control!!!

It's been in the 100's here the last few days everything has dried up fast...we've had a couple of little grass fires but so far nothing big...unfortunately it is just the beginning of the "season".

Oh how scary. Yes, some people do not think. Why would a teenage need to know if the lighter worked anyway? Glad that no homes were involved in the fire and so happy that the trees were unhurt.

It could have been so much worse, thankfully it wasn't. In these situations, fire can get out of control so quickly... everyone needs to be so very careful and think twice.

Yeah, kinda like so many idiots I see throwing their cig butts out the car window!! But thankfully we've had a few wet days lately.