It has been a good weekend.  Friday night I stopped at the mall and did some clearance rack shopping at Sears.  Their store brand is decent and some of the lines they carry are really nice, a Liz Claiborne line, Lands' End, etc.  Plus they sure know how to mark down things!  I got a couple of light cotton tunic-length shirts for only $12 apiece.  We are starting our typical weather pattern here for southern California beaches.  AM fog and low clouds, burning off to a nice mid 70's temp by early afternoon at the beach; much hotter inland.  Sometimes the fog comes back again around 4-5 PM, but since we live about 5-6 miles inland, it stays nice and sunny afternoons for us most of the time.  So you have to change your clothes about four times a day.  I like to throw on a tank top and lightweight shirt with my jeans so these were perfect.
When I got home it was nearly 7 PM and Grant was taking a nap since he had a band gig that night.  Mini was hanging out there with him. 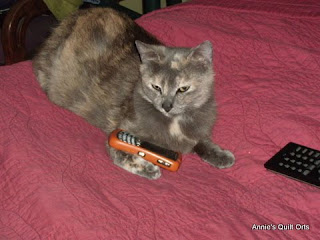 She was holding all his calls.
(Not a posed photo--I found her like this and ran to get the camera before she moved!)
Grant's band gig was at the local neighborhood bar just down the street and half the Bunco gals were there with their hubbies so there were lots of people to lend their support.  I joked to the waitress that I'd heard they were now carrying Pepsi and that's what drew me in.  The band sounded good as usual and it was fun to spend time with friends.
Saturday after a late breakfast and transcription work, I spent some time in the kitchen and yard, talked to my mom, called my sister, answered some emails, wrote a letter, and generally pottered about the house for awhile.  Grant crashed for another nap in the late afternoon since he didn't get to bed until 2:30 AM and I took off to do some errands.  Naturally that involved visiting a fabric store.  I bought myself a new seam ripper and a few random remnants.  Though I really wanted to find something I liked at my second stop, Cost Plus World Market, nothing jumped in my arms.
Saturday night Grant went off to hear a favorite local band (I declined his invite to come along) and during that time I wrote down all the instructions for Judy L's Mystery Quiltalong and started pulling out fabric.  I commandeered some that had been set aside for another project and pulled different fat quarters from my stash.  I am happy to say that I will not need to buy anything to play along (barring any disaster!).  Here are my selections: 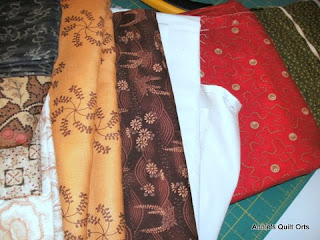 The cream is the background and the red and green the two main fabrics.  The six other colors will be cut into sets of three for a total of 18.  I am way behind but now that I have picked my fabrics I can start cutting tonight and hopefully be caught up with sewing by the time the second clue is posted on Wednesday.
I've been feeling the weight of too many possessions lately and this morning while my laundry was going, I started emptying cabinets and pulling things from my clothes closet.  A pile of shoes, purses, unwanted clothing and knickknacks will join this grouping of trays, platters with chips, flotsam and jetsam for the giveaway box: 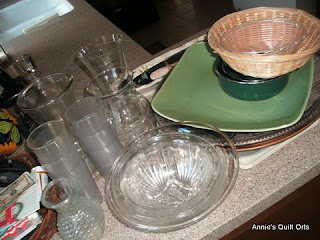 It felt good to pick through and just keep what is really going to be used.  I think this drive to get rid of stuff is also stemming from the thought of having to move a lot of things around when we get new flooring later this summer (fingers crossed).  Every cupboard, shelf, and closet needs attention at present...not to mention the garage, front porch and side yards as well.  Too much stuff.  But I've made a start and as we all know, that is usually the hardest part!
Erica was dog sitting Scully all weekend so was not here to flick her whip, but I did work on her quilt, getting the rest of the silk prepped, cutting the last of the rectangles for the flying geese and starting to sew them.  I'll finish them up after I post. 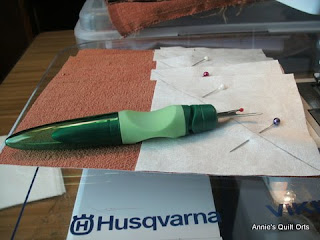 Of course I had to buy the green seam ripper.  It has a cap, which is nice, and I like the ergonomic style.  I've already had to use it once while sewing these!
Finally: GO LAKERS!!
Posted by AnnieO at 6:10 PM

I love a good de-cluttering session though. It makes me feel so much better.

And whoooooooo hooooooo for the new seam ripper. Hopefully you wont have to use it much .

Okay, I'm going to throw a monkey wrench into your works: http://www.gardensandcrafts.com/totems.html

Something you can do with your old glassware.


Besides throwing it at me, that is.

Happy to see another blogger joining in on the mystery quilt! Look forward to seeing your blocks!

I LOVE the picture of Mini!