Once again I am participating in the Blogger's Quilt Festival by Amy over at Amy's Creative Side.   Welcome Festival visitors to my little blog.  Hope you look around and enjoy your stay here.

The quilt story I am sharing is of my most recent quilt and the first one I have ever designed myself.  About a year ago my second oldest brother told me he was entering his 50th year and wanted me to make him a quilt for his 50th birthday.  He told me to keep in mind that they have a king sized bed.  Funny guy.  I told him there was no way that was happening I would make him a good sized throw.  I asked him all the usual questions about colors and themes.  He's a traditional guy so I chose a traditional block, a bowtie.  I played around with the idea, combining it with another block, wanting a bit of a modern look to the layout.  I looked at lots of photos of bowtie quilts online, and saw none that really grabbed my attention. So out came the pencil and graph paper. 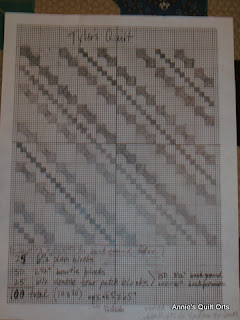 My design included fifty 6" finished bowtie blocks alternated with double four-patch blocks and solid squares in what turned out to be an asymmetrical layout.  I love a scrappy look so each bowtie was to be a different fabric, mostly from stash and scraps. 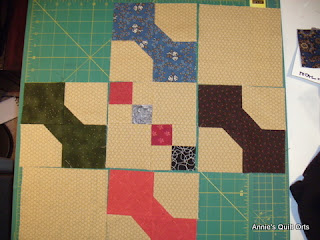 The plan for the background originally was to have it all the same.  But it was boring! 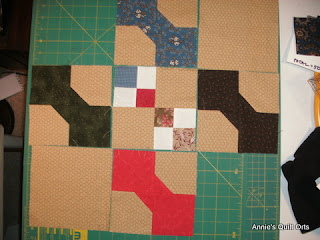 Some cream and white jazzed it up.  The quilt was officially a WIP and began to age as a lot of other projects jumped to the front of the line over the next few months... 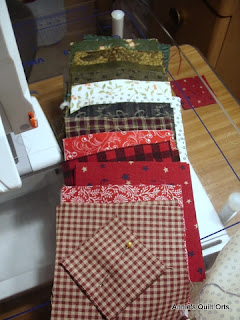 ...but by August I was finished with all the cutting and began to piece in earnest. 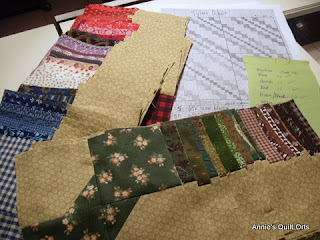 50 bowties ready for assembly into the top. 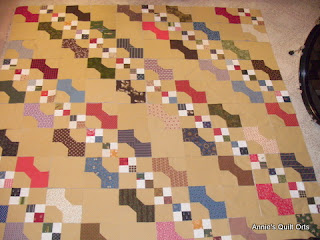 The completed top was 60" square.  Too short for a couch quilt, plus I'm not that fond of square quilts so it was back to the drawing board for what to do to make it longer. 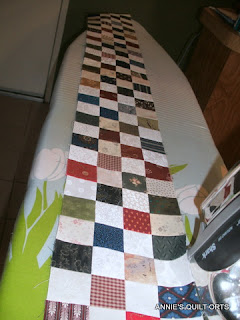 A whole lotta 2" squares later, I had top and bottom borders. 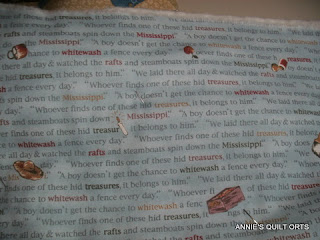 Originally I wanted a plaid flannel for the backing but settled on this unique Tom and Huck cotton fabric with phrases from Mark Twain's book. 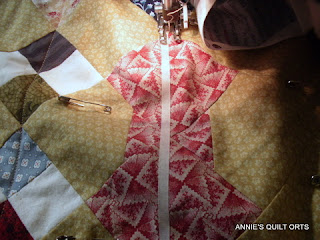 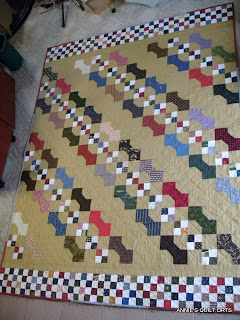 I completed the quilt by the deadline of October 23, 2010, sewing the label on in the car on the way to the party.  He had requested no gifts but of course knew his quilt was coming. 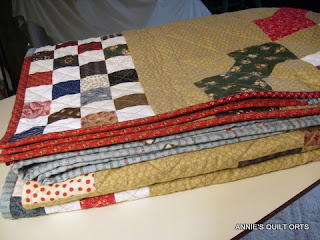 All four corners somehow ended up with red binding.  I liked it! 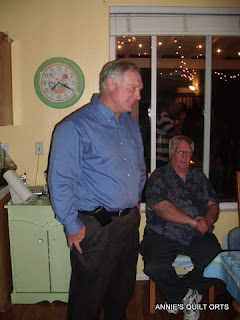 My brother liked it too.  Happy 50th Birthday, Tyler!
Posted by AnnieO at 9:23 PM

a very cute guy quilt! I am glad that your brother liked the quilt. Great way to use up scraps and small stash bits! Thanks for sharing

What a great story! It is cool to learn about your design process for the quilt as well. It turned out beautifully-- great job! Thanks so much for sharing.

Hi Annie,Thanks for taking a look at my quilt. I enjoyed seeing your quilt process. I have a bow-tie on my UFO list in very similar colors. I began it for my son who is now 24. I may just get it out after seeing yours. Happy Stitching, chrisb.

What a great story...I love the border on just the top and bottom! Great quilt!

I'm loving all these stories just as much as the beautiful quilts -- yours is no exception! Thank you for sharing both. :)

I love your solution to the size dilemma. I would have thrown some solid on there, but your idea is so much more interesting!

Oh, I really, REALLY like that bowtie quilt.
The light colored background definitely made the quilt dance, and then when you put those borders on, it started to sing !

Seriously, that is one terrific quilt.

My daughter asked for TWO king-sized quilts this year, one by machine and one by hand !
Not gonna happen.......she wound up shopping Dillard's for comforters !

What a wonderful quilt and a great story! I know he will treasure it . . .

I like your Bowtie quilt - I just recently finished one in a completely different arrangement a couple weeks ago. I have it on my blog although I chose a quilt that I had finished for Amy's site. I still have to quilt the bowtie - maybe next year?
Karen
http://karensquilting.com/blog/

What a great job for your first original design. I love how the 4 patches echo the bowtie pattern and the pieced border is a delightful finish. What a lucky brother.
Hope you can come visit my entries-
antique 1890 schoolhouse quilt and
black/white & pink miniature

Ooo; what a very nice Bowtie quilt! I like your variation on it with the 4-patch squares.

Oh Annie....this is sum great quilt!!! How oh how did you part with it after you finished??? I guess 'cause you have a great brother!!
Wow...adding that cream and white sure did zing it up a BUNCH...perfect!
I love how you quilted it too...that is how I quilted my first machine quilted one. The green fall one I did for hubby last year.
I certainly hope your dear brother loves and takes care with this FAB quilt....you did an amazing job!!!!

That is a great story and a great quilt Annie! I have a Bow Tie quilt in my future and I know what fabric, just not sure how it's going together. You have definitely given me some ideas. Thanks for sharing.

Bow TieS--what a fun quilt!!! The 4 squares with it really give some variety! Great job!

I like the back story, and male quilts require a bit of extra thought. Also love the backing fabric- great choice

I loved hearing about Tyler's quilt again all in one story.

It was close Annie..labels in the car and all- but well worth the effort since he loved it so much.

It's a truly beautiful quilt.

Those checkerboard borders really jazz up your quilt - great idea!

You you have the right idea about what to do with these people and their big beds. Give them a small quilt. I'm telling you I will have to recall this post in the future the next time someone tells me they need me to make the 100" quilt that I made to be made bigger! I feel like it's gone rouge on me!

Great choice to add the lighter creamy white - it absolutely makes this gorgeous quilt sparkle. Thanks for sharing!

Thanks so much for visiting me and leaving the kind comment!

The quilt you made for your brother is BEAUTIFUL! What a special quilt. I can't imagine your brother NOT liking it. :) Of course he loves it...

Isn't it great how sometimes a more organic design process makes for a beautiful quilt? Your brother's quilt is fantastic.

Thanks for your comment about my quilt; my mom does indeed love it. :)

Your brothers quilt is amazing!! Congrats on the design process...you should be so pleased with yourself...its turned out spectacular! xx

It's a great quilt Annie and I love the story you've shared of making it and gifting it to your brother. Your blog is beautiful, lots to admire.

I think you should continue to design quilts because this one is fantastic! The squares to lengthen it are the perfect touch. And I can't think of a better backing fabric. Love it!

Awesome quilt. Excellent job designing, nice use of color contrast. Your brother is one lucky guy. Thanks for sharing a great story.

What a great story! I love the red binding- it is prefect for the quilt.

What a beautiful quilt! I really love seeing it on paper, and then learning the process you took for making it. The colors work perfectly to show off this pattern, especially that fab border! Your brother must have been thrilled with it!

Great quilt! I love the setting!

Great quilt and story! Good to hear he liked it!

Great quilt! Adding the white was a great idea. I like the borders too. Thanks for sharing the process and the beautiful finished product.

I love bow tie quilts and the use of squares make this one terrific!
I loved seeing the sketch too!

That is awesome! Sometimes we still have to get out the graph paper, huh? It was worth all the effort. What a great quilt and a lucky brother!!

That is a really neat quilt!

This was a beautiful present! Using the white/cream fabrics in the border really was successfull. Thank you for sharing!

I love your bowties and especially like the checkerboard border.

What a great quilt, and a great story! I love how the white in the 4-patches really zings up the quilt, and the borders are the icing on the cake. What a great design for the bow tie. I like your scrappy binding too.
Do you have any scraps left?? hee hee!

I love seeing the prgression of how it was made - a wonderful quilt!

gee, what a quilt and what a story! I hope your brother loves it to bits! I know I would... :-)
Kristina

How could he not like it? It is incredible. I love the top and bottom borders.

I am still trying to get to all the wonderful quilts in the festival; maybe I will make it thru this weekend :)

I loved watching this quilt grow and so glad you finished it just in time. I love the way the red binding ended up on all four corners. It's a beautiful quilt Annie.

That is fantastic! What a great design! (I think you should write a pattern or do a tute, please?) Nice "guy quilt" for your bro!

your quilt is beautiful, your brother is lucky!
I enjoy seeing your graph paper design, I also do that sometimes, it is a great visual help. Great idea to switch the color in the 4 patch.
Thanks for visiting.