On Sunday, Grant and I went out to breakfast and then I requested a walk to the pier, which was just around the corner and over the 101 freeway.  We had rain early Sunday morning but that had cleared and it was just gorgeous out.  No wind, mild and pleasant temps. 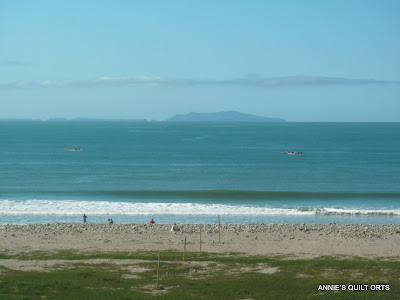 As we crossed the pedestrian bridge over the freeway, I stopped to snap these large outrigger canoes with six rowers, heading back to the harbor, far to the left of this photo.  (These pics should biggify with a click.)  On the shore are some folks fishing. 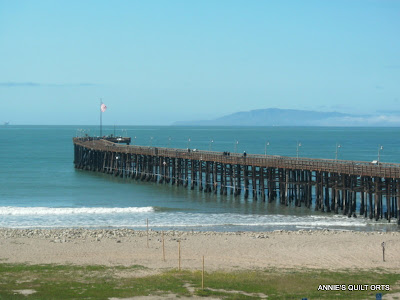 This time of year we can often see the terrain on the Channel Islands.  Most of the late spring and summer you would never know they were there because of the marine layer (low clouds and fog) that hangs around and keeps us cool, while the inland bakes.  People seeking the beach are often surprised that they need a sweatshirt as the fog and wind can be very cool in the summer when it rolls in. 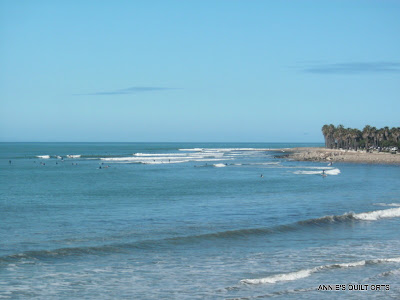 There were lots of surfers in the water, including some standing on their boards with paddles (far right). 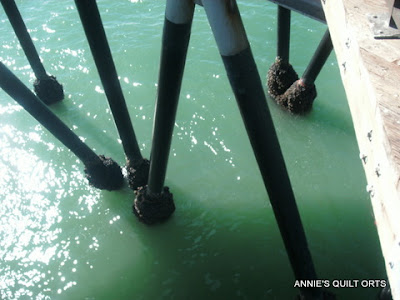 We looked down through an opening at the end of the pier.  The sea was very green. 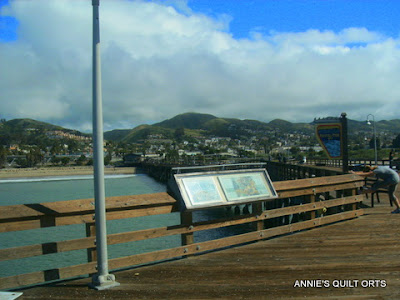 And this is looking back to the downtown and hills behind the city.  (Didn't mean to catch that lady stretching--I didn't even see her when I took the shot!)  It was a great way to spend a half hour after breakfast. We vowed to do this more often. Hope you have a favorite place to stroll with your honey!
Posted by AnnieO at 9:46 PM

Beautiful views, thanks for sharing.
Living on an island, we're often surrounded by a similar marine layer, it's wonderful to see the UK on a clear day.

It's said that Australia has some of the loveliest beaches in the world. Looking at your gorgeous pictures I think your corner of the US could give us a run for our money. Thanks for sharing . I love your posts when you take us around to see what you see. They're among my favourite posts !

Makes me feel a wee bit warmer as I sit here with a light dusting of snow. Is there anything more peaceful than the ocean...well perhaps the mountains.

Wow! This is beautiful. How joyful. Thanks for sharing.

No place nearly as lovely as this...beautiful colours in these photos!

Beautiful place to take a walk! Lucky you. :)

Very nice walk. Thanks for taking us along.

OOOHHHH...as I look at your photos and read your words I feel soooo relaxed! Looks and sounds like some GREAT 'honey' time!