Another version of switcheroo happened this weekend as son Nick swapped bedrooms with his sister Erica, in absentia.  His large furniture was an extremely tight squeeze in the smallest room of our house so he's happy to have some actual walking around room now.  Grant and I fixed up Erica's new room and I switched the bedding to display my Grandmother's yo-yo coverlet.  I have shown this coverlet before on my blog but it has not actually ever been on a bed, that I know of, until now. 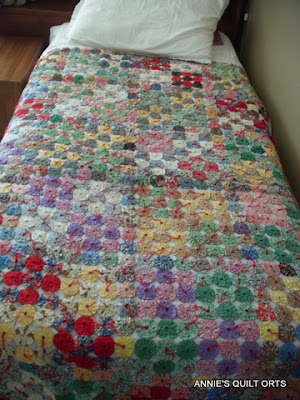 Grandma was a teenager in Norfolk, Nebraska when these yo-yos were made from feed sacks/sugar sacks and stitched together into 9-patches and then 4-patches with lines of single yo-yos separating them.  I don't know for sure if she was the sole maker or if her younger sister Ella May and her mother also helped.
. 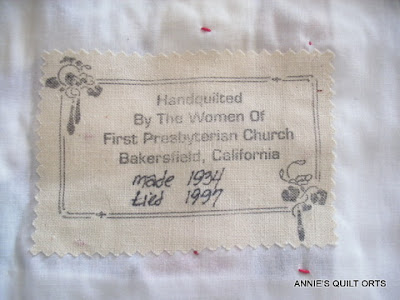 It remained a UFO from 1934 until 1997, when Grandma had the ladies at her church tie the yo-yos to a backing with perle cotton (it is not actually quilted since there is no batting). 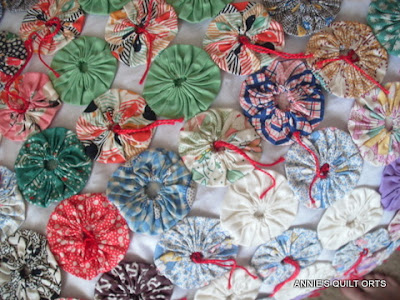 Here's a close-up of some of the prints.   Grandma packed this away after it was tied and I was never aware of it until the mid 2000's, when she brought it out to show me once when I was visiting her.  I loved it and am so glad it came to me when she was moved into a senior home and her house emptied some years later.
Posted by AnnieO at 7:45 PM

What a beautiful family heirloom that you all can enjoy!

The yo-yo quilt is indeed a family treasure. And you're lucky to know so much of its history.
You'll be a caring owner of it.
Thanks for the close-up of the tying. I have to admit I'd never thought about how those were finished, with all the open spaces.

What a beautiful coverlet Annie and it comes with even better story!

Glad to hear Nick has a bit more space.

What a beautiful quilt....is it just the yo yo's or does it have a back to it as well?

How beautiful.......certainly a treasure! Nice that there is a label on the back. My great grandmother was a quilter and I have many of her quilts that I wish I knew more about because there are no labels. This also gives some of my UFO's some hope that they will be finished at some point.......glad she finished this and glad it was given to you :-)

Some of my grandfather's family lived in Bakersfield for awhile, and were staunch Presbyterians, but I think it may have been before the 1930's. Still, it was a jolt to see that quilt label! What a wonderful treasure to have.