I could hardly tear myself away from watching live video last night as the horrific devastation overtook Japan's people from the earthquake and tsunami.  Shocking and heartbreaking beyond my experience or imagination.  My blog friend Tanya (Taniwa), who lives in Japan northeast of Tokyo but not at the coast, did post that she, her husband, and her visitor from Australia, a fellow quilter, were unhurt but suffering from the continued huge aftershocks.  I saw a news report this morning that said as many as 88,000 people may be missing.  I sincerely hope that is a wild overestimate.

Tsunami warnings were of course given for all the Pacific.  For our part, Southern California, only an advisory was issued. 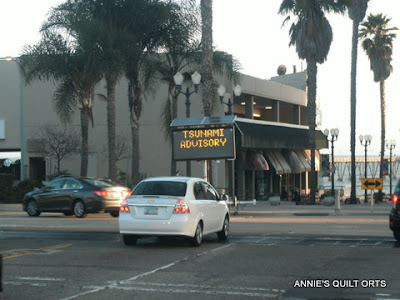 An amazing sight along Harbor Boulevard, feet from the beach and pier. 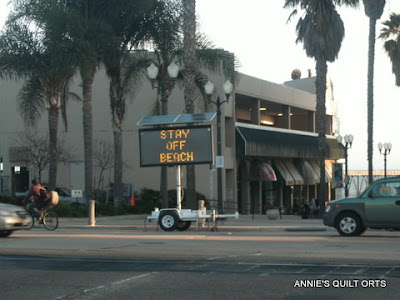 Not that anyone paid attention to that sign.  Local L.A. news crews were filming here in the morning and captured video of the fascinating though fortunately miniscule effects, here.  The office where I work is less than half a mile inland.  If there was a significant tsunami strike,  the office and a large portion of the western part of my city would have been inundated.  A scary thought indeed.  We do have sirens and evacuation plans but I can only think what pandemonium would ensue with everyone trying to escape at once. 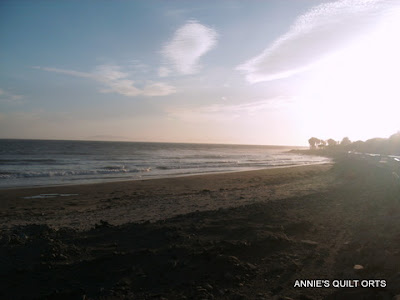 A sunset view was much safer than the morning one, though no damage was reported from the small surge we experienced. 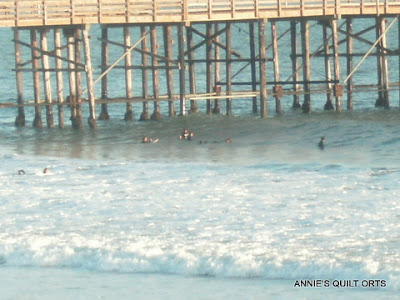 The surfers were immediately back in the water following the morning's tsunami ebb and flow, and I wondered at their sanity in doing so.  Here are more at a favorite spot next to the pier at sunset.
My thoughts are with the survivors and those waiting to be rescued, waiting to bury their loved ones and see if any of their belongings can be found under all the mud and debris.  This awful story has just begun.
Posted by AnnieO at 9:30 PM

I emailed a CA friends and said "surf's up" as I'm sure the surfers were out catching some wild waves. Japan was my home away from home for 3 years and I'm just sick over this tragedy.

Glad that the tsunami was minimal in CA. Prayers for those in Japan. Kiddo had a Japanese student in her class until Jan of this year. His dad was here on business. They've heard the family is OK, but the father is stuck in Tokoyo and can't get home.

It's so scary isnt it ,and the news out of there is just getting worse with the nuclear reactor now looking like it's going to add to the woes of the japanses people. There has been so much tragedy lately ...

My thoughts are with them too...a collective heart we all have.