Getting Out, Making Music

Cousin Florence is visiting my folks from Ohio and I was invited to go along on a museum trip to L.A., for which I gladly took a day off work.  But first, we lunched at an upscale Pasadena restaurant called the Parkway Grill.  It's a warm and inviting restaurant with original art on the walls and delicious gourmet food. 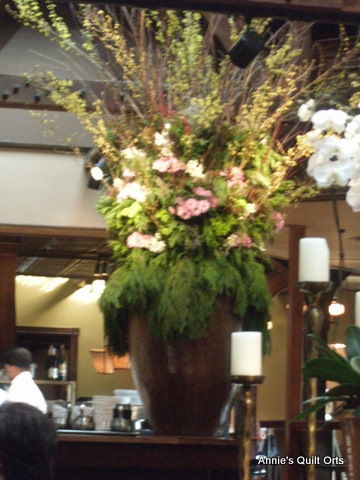 Florence learned the towering arrangement in this enormous vase is made of fresh flowers which are changed frequently. There are eight one gallon vessels in the vase to hold the flowers.  After stuffing ourselves thoroughly over a leisurely hour and a half lunch, we headed to the nearby Norton Simon museum.  Anyone who has watched the Tournament of Roses Parade on New Year's Day has seen this modern building as it is on Colorado Blvd. 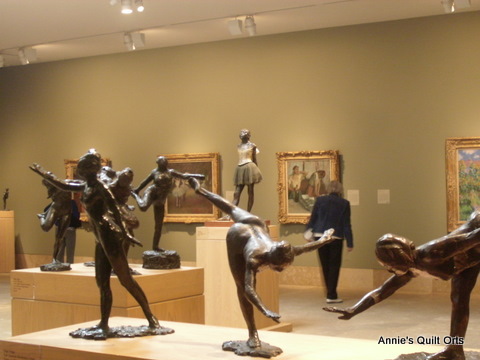 A vast collection of my favorite Impressionist art occupies many rooms in one wing.  These are sculptures by Edgar Degas.  One of my favorites is The Little Dancer, the larger piece in the rear of this photo. 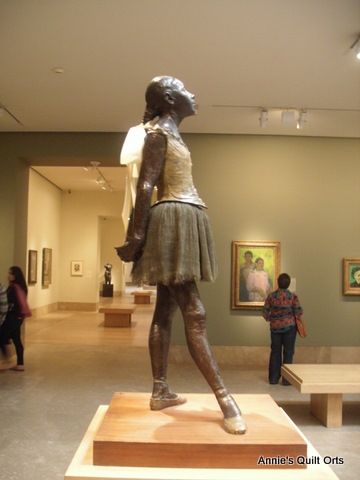 Her cream silk ribbon looks new but her linen skirt was probably not this color originally.  Degas is best known for his oil paintings but also made hundreds of bronze sculptures in his later years. 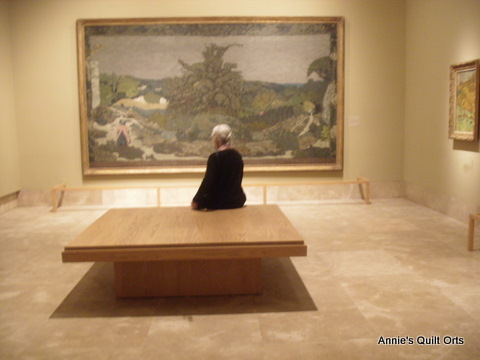 I came around the corner a minute after my mother and liked this composition. 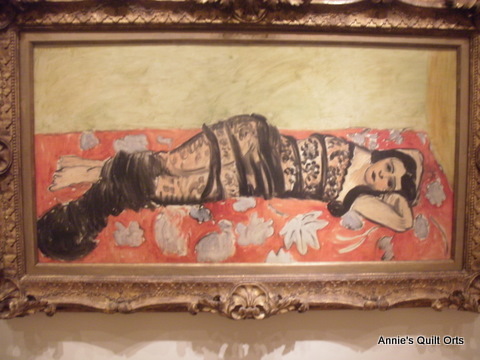 Matisse often used printed fabric as backgrounds throughout his career, and on his models, in this case black lace. This is a larger painting of about four feet wide. 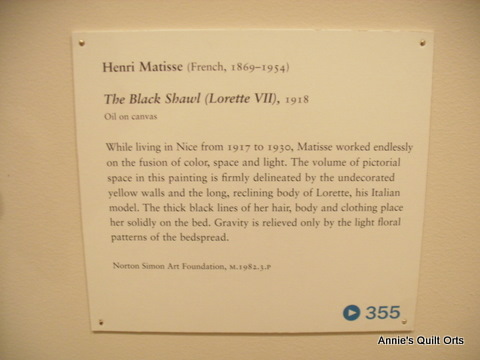 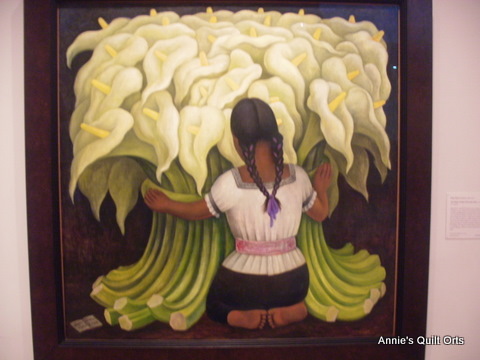 Diego Rivera painted these exuberant modern portraits and is known for his murals and as the husband of artist Frida Kahlo.  This painting was donated to the museum by actor Cary Grant. 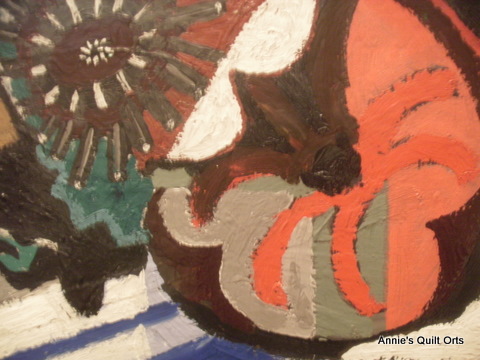 The thing I love most about going to art museums is the opportunity to get up close and study how much paint and what kind of decisions the artist made during his composition.  Here you see he started with an orange sort of crab leg shape but painted over part of it later with the brown. 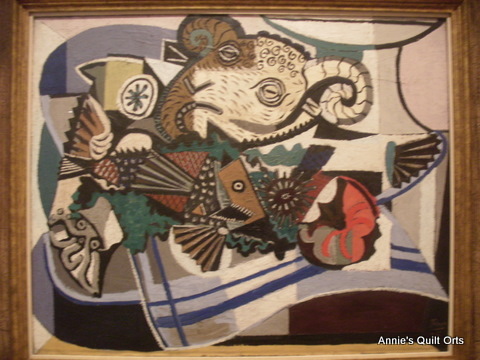 Picasso was very fond of color but what I really like in this painting is the use of browns, grays, and neutrals.  It also looks like a blue bordered linen towel was part of this still life. 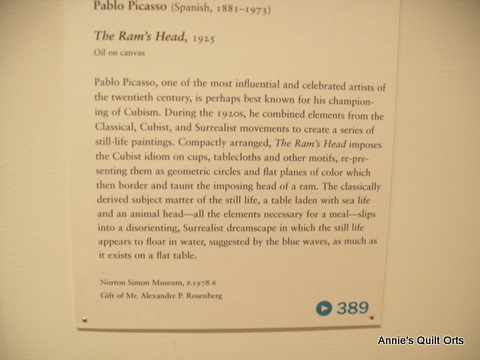 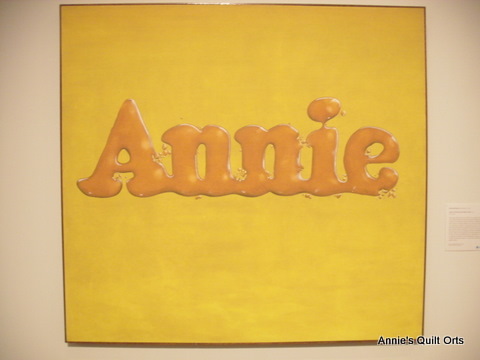 This modern art painting drew me, for some reason :) 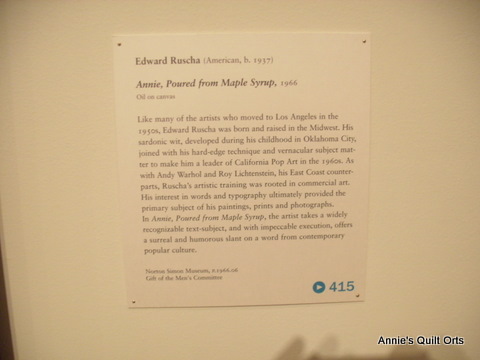 I encourage everyone to visit galleries and museums locally or in nearby cities. Often the entrance fee is low--or free, with a suggested donation only. There's nothing like seeing art in person. 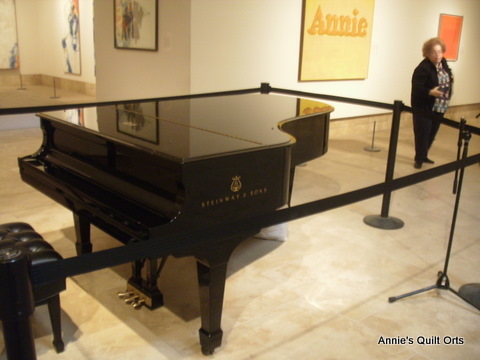 A Steinway Baby Grand piano was set up in this gallery and speakers were being placed by AV staff.  Wonder who played this after we left? 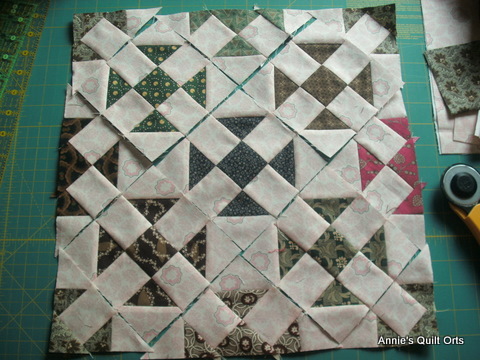 I created some music of my own Friday night by completing the corner blocks for Pink Lemonade.  This modified mock up is pretty cute too, without the yellow alternate blocks.  Though I searched my local fabric store again, neither of the two yellows I found worked. I'm hoping to find a good one at the Road to California show tomorrow, where a meet up with Libby and Julie is planned.  Very excited!
Posted by AnnieO at 11:48 AM

Oh gosh I went to the Norton Simon Museum for a project while attending Mt SAC Jr College! :o) Gorgeous museum. So many CA landmarks have me skipping down memory lane. Your Pink Lemonade is very pretty.

What a fun day! And some lovely art, all around. I was drawn to the little ballerina. And of course, your darling Pink Lemonade layout! :)

Hi Annie,
Many years ago we went to France and while in Paris went to the Louvre and the Tuillerie Gardens. The Impressionist gallery has since moved to a refurbished rail station called Rue de la Gare ( I think) Anyway there are many fabulous works in the gallery but the one that stuck with me was this beautiful petite danser. I remembered the look on her face. I love the impressionists paintings so I did not expect to be so moved by the sculpture. Two years ago our local art gallery opened a beautiful new building and they brought in a collection of Degas sculptures including the Little Dancer. I was thrilled to be able to see her again. I love art- the current show has some french photographs and they had some earlier french paintings. Sometimes the work is not my favorite but it is great to see some new and different work. Last summer they had some works by Henri Matisse. The annual fee for the year is less than 100 dollars and you can go as often as you would like..
Thanks for sharing. Regards,
Anna

Looks like a fun Saturday. Over the Thanksgiving holiday one of My Guy's sisters got tickets to Crystal Bridges, the new art gallery in Bentonville, AR sponsored by Sam Walton's (of Walmat fame) daughter. The building is fantastic and so is the art.

Good luck finding the right yellow and enjoy your visit to Road to California. We expect lots of pictures next week!

Lovely gallery post.
It was fun to meet you and see your yellows for Pink Lemonade! Maybe...I'll have mine quilted this month.

I think I actually like it better without the alternate blocks!