The Squirrels Are Unstoppable

Still finding squirrels!  I had pulled fabrics for this quilt a couple of months ago but never got anything cut, which is why it was still on the cutting table, duh. 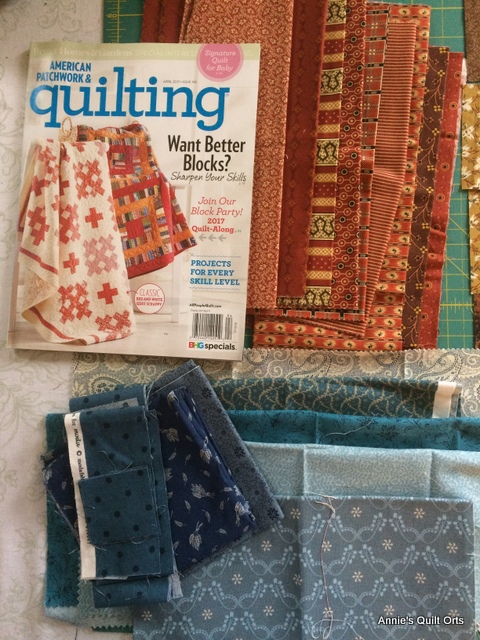 I even labeled this photo Squirrel, which I had forgotten, ha ha.  The cover quilt in the foreground of the APQ April 2017 magazine is called Cross Reference (designer Susan Ache) and my plan is to make a smaller, couch quilt size quilt.  From stash I pulled blue and rusty orange mostly repro prints, and will copy the solid cream background.  Our son may be moving out of a studio to a bigger apartment soon and will need a couch quilt. Well, first he will need a couch, but THEN he will need a couch quilt.  Given the speed at which I finish quilts, I decided to get cutting. 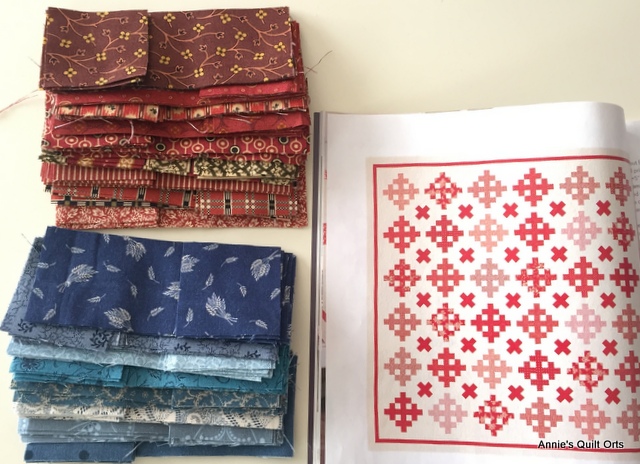 Blue is a color I don't use much so will have doubles of some of these prints.  I decided to make all the cut blocks before deciding which to add.  I'll dig around the scrap and strip storage for any other suitable blues.  The small cross blocks will be a solid blue of some shade, TBD.   On Friday after work, I was able to get 60% off  my 3 yard cut of Kona Snow at JoAnn's.  Then I took a turn through Hobby Lobby, where they were playing the most depressing music ever and no one was smiling much, least of all the employees.  I didn't buy anything.

Saturday I got the UFO of the month spray basted but couldn't find any enthusiasm to start with the quilting.  I did sketch out a plan, however, and got working on that today.  But more on that tomorrow  when we are to show our progress on Patchwork Times.   I hope no more squirrels show up in the meantime...
Posted by AnnieO at 9:29 PM

Your doll quilt for the swap is adorable.
Your son is very lucky, the couch quilt is going to be great! I really like your fabric choices.

While you're at it, would you make me that scrappy quilt on the cover, in the background? : )
I think the quilt you are making for your son is going to look great--love the color palette! Hope he finds a couch in time to make good use of it. Come to think of it, my son stored 2 couches in our basement when he moved into a furnished apartment. I think he has forgotten about them. He has moved several times since then and has now left the valley. Too bad we are so far away, or I would let your son come load them up! *LOL*

Squirrel projects . . . yeah, I totally understand that term! I don't want to think about how many I have tucked away in different places; projects that drew my attention away from whatever I was currently working on, but never got finished. LOL! Yours is fun ... your son will enjoy it -- the colors are great! What a lovely housewarming gift! :)

I love both of the quilts on the cover...lovely fabrics you have pulled!

Both are very attractive squirrels...love those rusty oranges. And what is it with music in stores? I've noticed lately that some times there isn't any background music which is a bit unsettling...and then other times the choice of music is just weird...I think that some places are letting employees pick the music and the 20 something's choices are always conducive to shopping or eating...just my opinion.

Oh but it's such a fun squirrel! Sounds like you got a good start on it. Looking forward to seeing this one come together.