Judy of Patchwork Times chose #7 for June's UFO project.  On my list, I'm choosing a UFO to send out to be quilted.  There are four quilt tops currently hanging in my closet that need to be quilted, two of which I will quilt myself.  The others are just too big for my small harped Husqvarna Lily.  The oldest--and largest--is an oversized version of Bonnie Hunter's Rick Rack Nines. 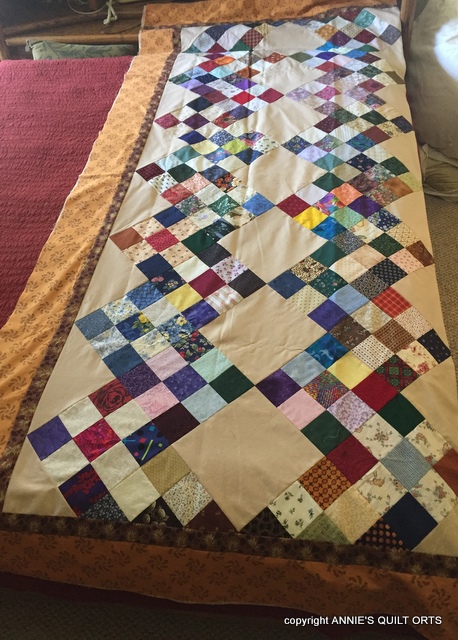 Years ago I was in a Yahoo Group called Quiltbiddies and we did a lot of block swaps.  These 9 patches were made with 3.5" squares so the blocks are pretty big.  I loved Bonnie's zig zag setting and used her free setting triangle chart for the tan solid. I'm thinking a Baptist Fan would be nice for the traditional scrappy fabrics and colors. 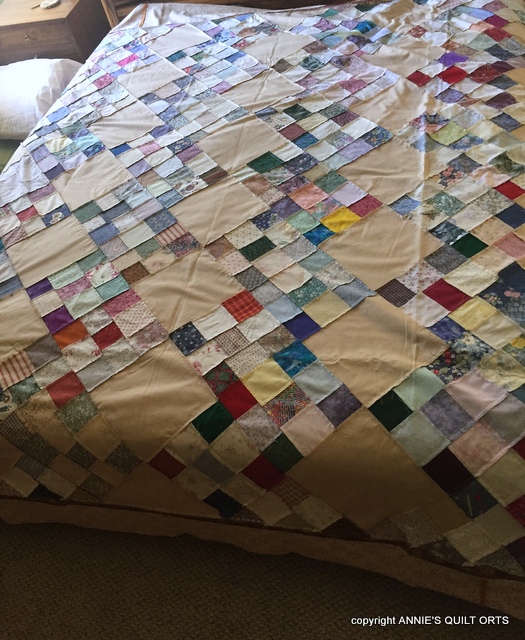 I ended up having to make a few half blocks for the top and bottom of the quilt as some of the swap blocks were not usable or I didn't care for the colors.  This top is 92x105 and will cover our CalKing bed.  I purchased a 108" wide backing at Road to California, so will need to add leaders to the top and bottom, at a minimum, and find a quilter with a long arm large enough.  Speaking of Bonnie Hunter, who used to also be a member of Quiltbiddies long before I joined, she is coming to a local quilt guild this month and I snagged an open spot for her My Blue Heaven workshop.  There is a lot of cutting to do before then but I am really looking forward to it.  It was a "Biddie" who led me to Bonnie's Quiltville blog in 2009--before then I had never heard of quilting blogs.  It wasn't long until I started my own blog, and here I am all these years later.

The other quilt is also constructed of 9 patch swap blocks in reproduction fabrics; these are 6" finished.  There were so many swappers that we each received about 80 blocks.  This is the third project I made from my cache, which I'm calling Cheddar and Cinnamon, and it is 72" square. 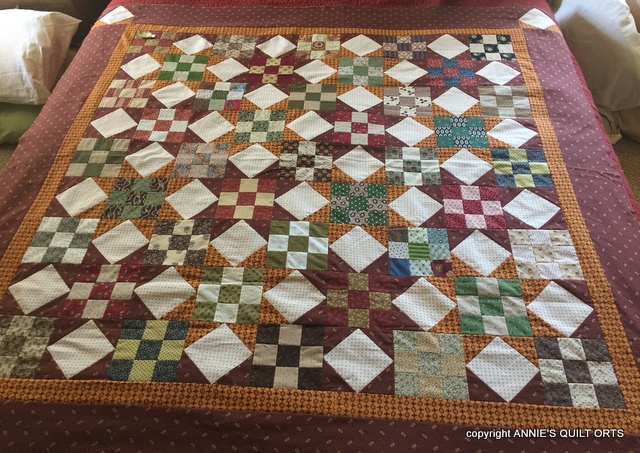 Can you see them now?  I'm thinking this quilt will need some custom quilting to bring out the stars and minimize the background fabric.  A backing and even the binding has already been made.  Perhaps I will send them both out!
Posted by AnnieO at 5:09 PM

You're going to a Bonnie workshop! How fun. I attended one in San Antonio a few years ago and loved it.

I am REALLY liking Cheddar and Cinnamon! Very warm and classic looking.
I'm looking forward to a Bonnie workshop next month. She really gets around, doesn't she? And her blog was the first one I found, too. : )

Oo, I really like Cheddar and Cinnamon! What a great name. I immediately saw how you were using the two colors to create alternating stars. Very clever!

Gorgeous quilts! I really like the Cheddar and Cinnamon. Good luck with this month's UFOs. How fun you'll get to take a Bonnie Hunter class!