Returning to work this week was right to the grindstone, lots of flu here and plenty of general upper respiratory conditions.  We've been double booked morning and afternoon.  Many people with chronic lung conditions have been affected by the Thomas Fire, which is still burning itself out in the backcountry, 92% contained.  Every day we learn of more patients who lost homes or were displaced in the evacuations.  I finally saw the doctor for my own persistent cough of 6 weeks or more, was diagnosed with bronchitis, given an inhaler, and sent for a chest x-ray (which fortunately was normal). I hope to feel back to normal soon.

The other day, I drove up to one of the worst fire damage areas in my town, just a couple of miles from home. 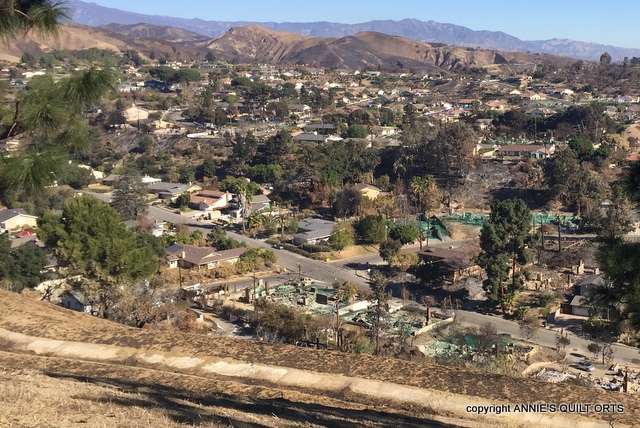 The wind-driven fire swept through the middle of the neighborhood in the middle of the night, December 4th, spreading embers willy nilly. Firefighters poured into the neighborhoods but were unable to save as many as they tried to.  There were hundreds of homes burned, mostly in the foothills above town, over 1000 (most in Ventura County) over 700 of which were single family homes.  An entire apartment building complex burned completely to the ground, displacing dozens. 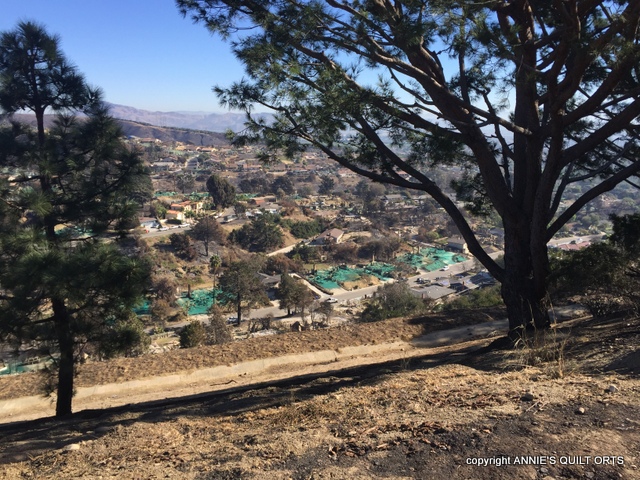 I don't know what the green stuff is that was sprayed over the ruins, whether fire retardant or some kind of suppressant for the ash/chemical residue from burned building materials.  Insurance company vehicles were everywhere, and I could see homeowners wearing masks sifting through wreckage.  "Sifting Parties" are a thing now. 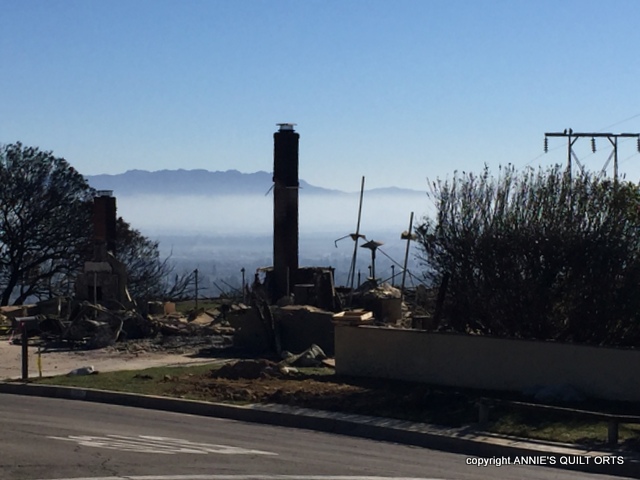 Many of the burned houses are only marked by chimneys and burned vehicles that once were inside garages.  On days we have onshore winds from the ocean, the coastal plain is smoky for miles inland.  This pic is from about a week ago and the smoke is less heavy now, this far inland (about 5 miles). Fortunately, due to early evacuation policies, there were no resident deaths in this area, and only one death of a resident in Ojai,where a woman died in a single car crash while evacuating from the fire.

Our own Ventura Modern Quilt Guild is making Perkiomen Valley blocks, designed by a member, for Thomas Fire victims and support has poured in from all over the county and country.  Multiple cutting and sewing parties are planned to get quilts made quickly and into the hands of those in need, from donated blocks and fabrics.  We have been fully inundated with fabric donations already.  Those who wish to help are asked to make blocks either individually, may join one of the many sew in dates, or donate batting.  Details HERE.

While we need rain desperately here in Southern California, just a little at at time would be best.  Some moisture is expected early next week, fingers crossed it is not a heavy storm adding flood to the fire damage.
Posted by AnnieO at 10:46 PM

I really appreciate the insight into the situation, Annie. And thank you for the reminder about making the blocks!

A fire like that is so horrible. Thinking of all the poor people and pets displaced... past memorabilia lost... the future uncertain.

Fires are SO HORRIBLE! But then so are earthquakes, tornadoes, hurricanes. Pretty hard to escape most if you're in the path and to just lose everything is unimaginable! I remember living in CO about 15 years ago when there were huge fires around. The air was heavy with smoke for a few weeks and driving by the fairgrounds in Durango where the grounds were absolutely COVERED with little pup tents for firefighters..a small village in itself. Glad those there are nearly contained.

Very sobering update. Thanks for keeping this situation before us.

I actually got tears in my eyes....this is just so devistating. I actually donated some quilt blocks to be included in a fire victims quilt. SMILES!!! May make a few more this weekend.

Thanks for the update on your area. Those fires have been replaced by other things in the news, but even a month out, it is a daily challenge for all those people. We don't need to forget.

Thank you for the update. As Stephanie commented, the media has "gone on;" the last bit of news I had was over a week ago in a brief conversation with one of our returning fire fighters. These are excellent photos of a bad situation. Do you keep a to-go kit handy? I do. Up here in the northstate, it is wildfire risk in the summer and river flood in the winter. I hope you are feeling tip-top soon.

That is just a dreadful situation there. I must get myself organized to sew some blocks for this project.
Thanks for the link!

oh my, only 2 miles from your home. I love the block. My heart goes out to the entire community, especially those that lost their homes.

Thanks for the update, Annie. I would like to donate some batting. Can you please email an address to me where I should have it shipped? Thanks.

Such devastating photos! Hope that everyone starts to feel better soon as the smoke clears. I've got 4 blocks made that will go in the mail on Monday.