Flood after the Fire 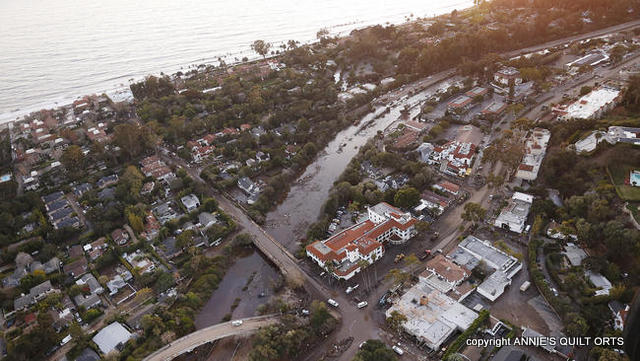 The Thomas Fire disaster has been increased to include flood, as many will be aware from the horrendous news video and photos shown of the Montecito area of Santa Barbara, 20+ miles to the north of my city.  Torrential rains on the night of January 8-9 caused mudslides and a creek to overflow its banks, sweeping tons of mud, huge boulders, trees, and water into houses and businesses, sweeping them off their foundations and filling them many feet deep in an instant.  It is a sad truth that the firefighters kept  these houses from burning a few weeks prior, only to have them destroyed by flood.  So many lives lost and many more to be found buried in the mud, likely up to dozens, though so far 17 deaths have been confirmed. Our son's girlfriend lives in Santa Barbara, a short distance from the devastation, but luckily she and her brother are safe. 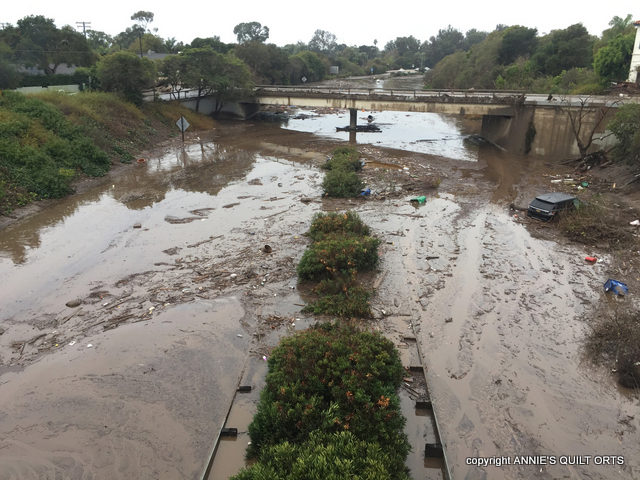 The main 101 freeway along the coast is impassable for many miles due to massive swaths of debris and mud.  This pic above from the internet shows how the pavement is not even visible.  Those bushes in the center divider are about 8-10 feet tall.  This heavily traveled road and rail service closures have resulted in a sea shuttle, with boats leaving Ventura Harbor three times a day and making the two hour boat trip up to Santa Barbara Harbor  Others are flying out of nearby airports to Santa Barbara; once again generous folks have offered free or reduced cost services everywhere to help survivors and residents.  I traveled this road daily myself for a year and a half when I worked in Santa Barbara a few years ago.   A multi-hour detour is now required to enter the city if driving from the south, with all trucking re-routed. 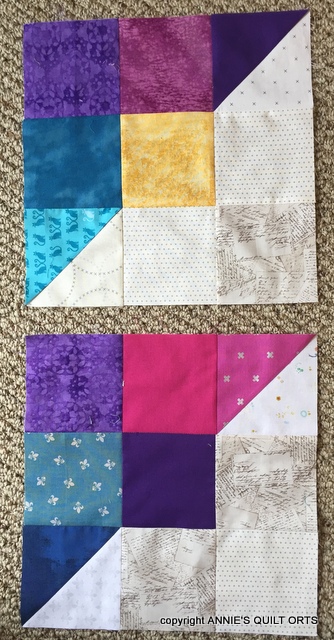 At our Ventura Modern Quilt Guild meeting the night the rains started, we discussed that any flood victims would by extension be Thomas Fire victims and we will distribute quilts to them as well,  never wishing such to come, or so soon.  Hundreds of Perkiomen Valley quilt blocks have been made and more donations are coming in.  We were set to donate our first set of quilts that night but the person who was to pick them up stayed home due to the rain.  Our guild president was tearful when telling us that the generous folks managing the Road to California quilt show this month donated a free booth and electricity so that we can collect any blocks/donations there. Amazing!  I brought home blocks and a quilt top/finishing kit to make, and donated a couple of blocks of my own, above. My car is full of an entire roll of batting, two huge tubs full of fabric ready to be made into quilts.  Multiple other local guilds have donated to our little guild, so generously, and we thank them sincerely, including Simi Valley Quilt Guild, Camarillo Quilters Association, and Valley MQG. We hope the rain, as much as we need it to end the drought, stays away for now.
Posted by AnnieO at 11:37 AM

So awful just seeing it on TV. I can't even begin to imagine. Saw Oprah slogging through the mud. Hope that's the end of the worst of it and things begin to improve from here on out.

So sad.Hope will be good so soon
clipping path service

Such an unfair double whammy. Glad to know you and your family and friends aren't affected to badly.