Halloween decorating was late, but I still got some up--if only to enjoy it myself! 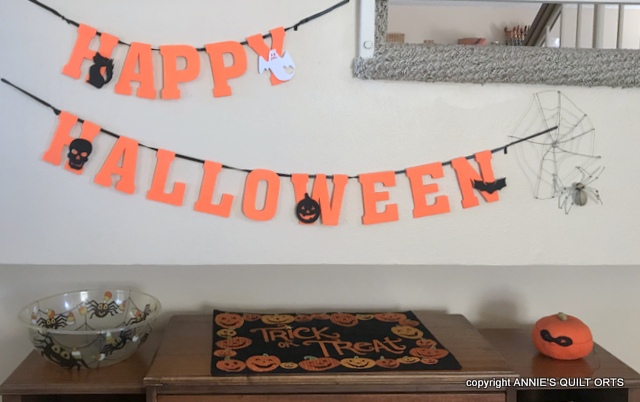 Grant wore a mask and used long barbecue tongs to distribute candy to the very tiny number of trick-or-treaters that came to the door--none were really expected due to COVID restrictions.  There was one group of about 4-5 younger kids, and an hour later one teenager.  Good thing Grant bought the 100+ piece bag of candy---not! 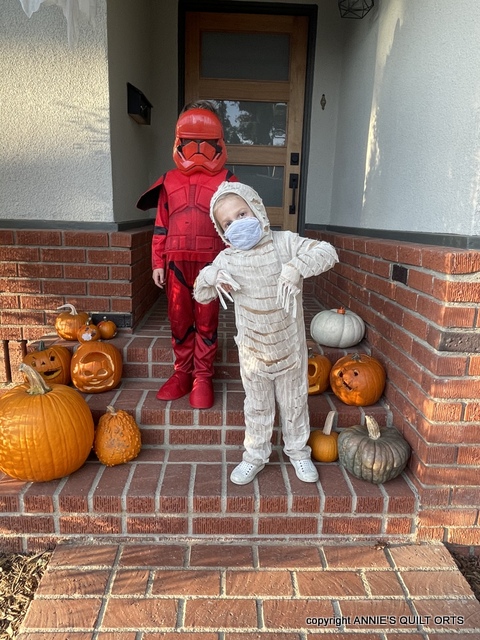 Grandson Cove was a red Sith Stormtrooper and Hunter a mummy.  They had a little socially distanced Halloween get together with their cousins and other grandparents in their backyard and did no trick-or-treating, but had fun anyway.  Baby grandson Dane had a Halloween onesie that Mama sent video of him wearing. 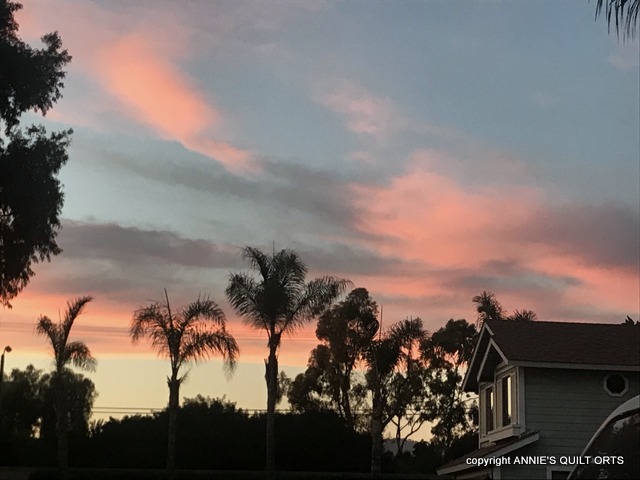 Pretty Halloween sunset and later we watched the Blue Moon peek out from behind the clouds.

On Friday afternoon I had gone down to the beach while Grant was still working, seeking some Vitamin Sea.  While it was sunny and warm at our house 5 miles inland, the fog was hanging off the coast and there were no surfers as the tide was way out. 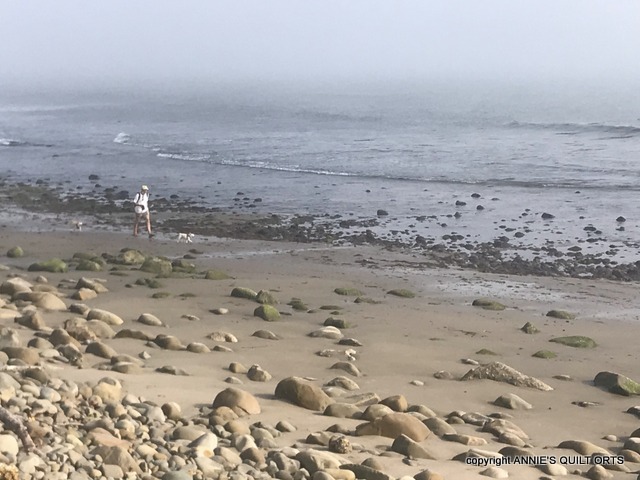 I caught this quick composition from the bluff before the gentleman passed by on the shore. 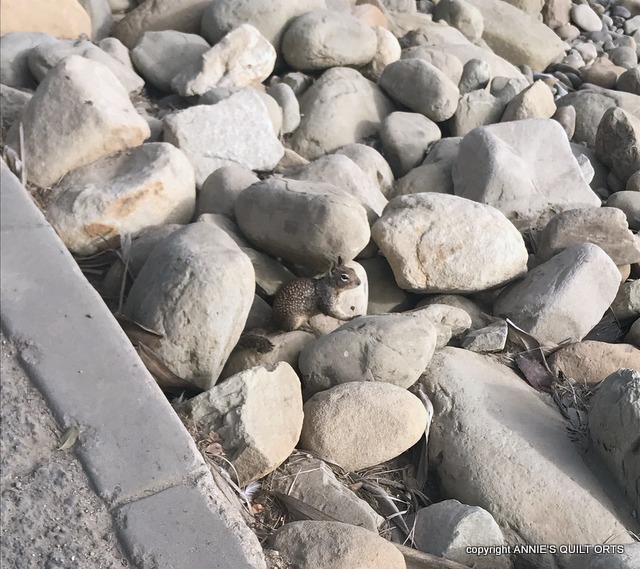 I surprised this squirrel a ways down the path, it stood stock still until the first instant I looked away, and then it disappeared under the boulders.  There were many tons of rocks piled up below the bluff, trying to keep the shoreline from erasing the pavement and sidewalk above.  There was no easy way down to the beach, so I kept walking. 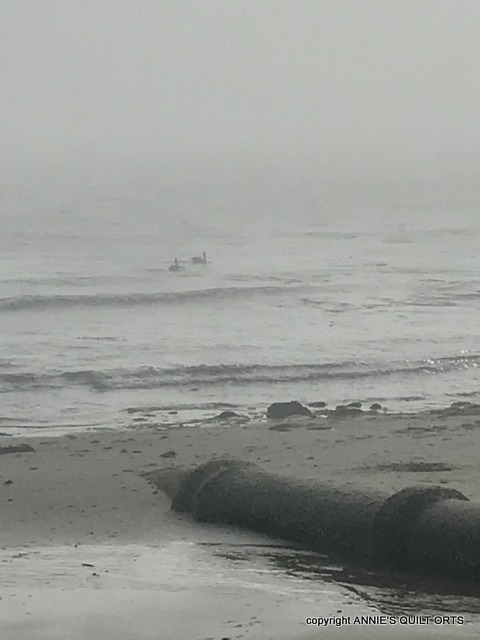 These California Brown Pelicans are huge birds, fishing the shallows.  I was standing easily 100 yards away and zoomed in as far as I could.  I wish my picture of them flying had come out better.  I'll visit again when the walls of the house seem to close in too much and I need another dose of Vitamin Sea.

Sherrill said…
I didn't buy candy this year as I was unsure if anyone would show and certainly didn't need it laying around calling to me afterwards! Love that mummy costume--cute!! We had a few chilly days but it's getting back to normal and I try to get out in the yard for 30 min. each day for my C (as opposed to Sea..LOL) in addition to a little color on the skin.
November 2, 2020 at 6:01 AM

Shasta Matova said…
Both of the costumes are perfect for mask wearing. You have such beautiful scenery for your walk. Thanks for sharing it with us.
November 2, 2020 at 4:43 PM

Mrs. Goodneedle said…
Your scenery is gorgeous. Happy Halloween to you and yours too; this certainly has been a strange year we won't forget for SO MANY reasons.
November 3, 2020 at 1:19 PM

Janet O. said…
Looks like you enjoyed some festiveness, in spite of the strange times.
The sunset and the sea are beautiful. Thanks for sharing them.
November 3, 2020 at 8:48 PM

Tanya said…
Although Halloween in the past has become a big thing in Japan this year it was pretty tame in Tokyo and non-existent in my neighborhood. I did have a small package of 10 chocolates that someone gave me that I refrained from eating myself in case any trick-or-treaters came by (in all the 30 years I've lived here there have only been two times) but as expected, nobody came so I guess I can eat the chocolates now!
November 6, 2020 at 11:22 PM

Kate said…
Cove and Hunter had really fun costumes, very cute guys. Hopefully they still got the chance to enjoy their Halloween. Your walk by the beach looks wonderful. It easy to think the walls are closing in. We feel that way and we go into work regularly. Hope this week has been a good one and you've had time for some fun stitching.
November 7, 2020 at 8:27 AM 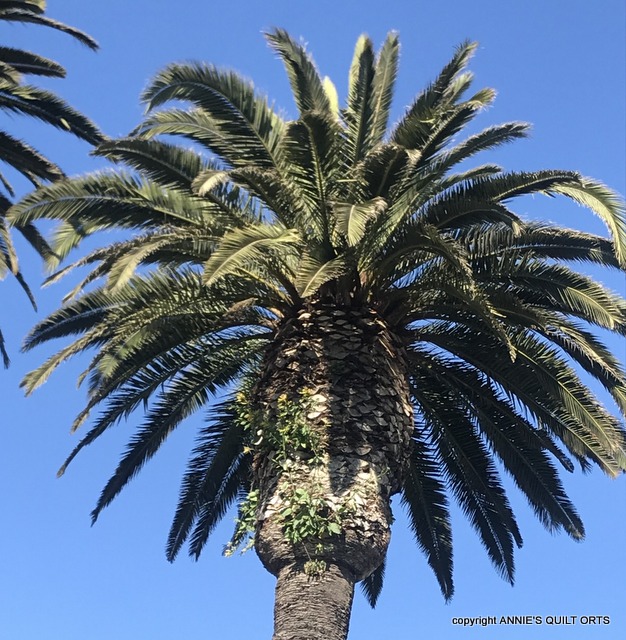 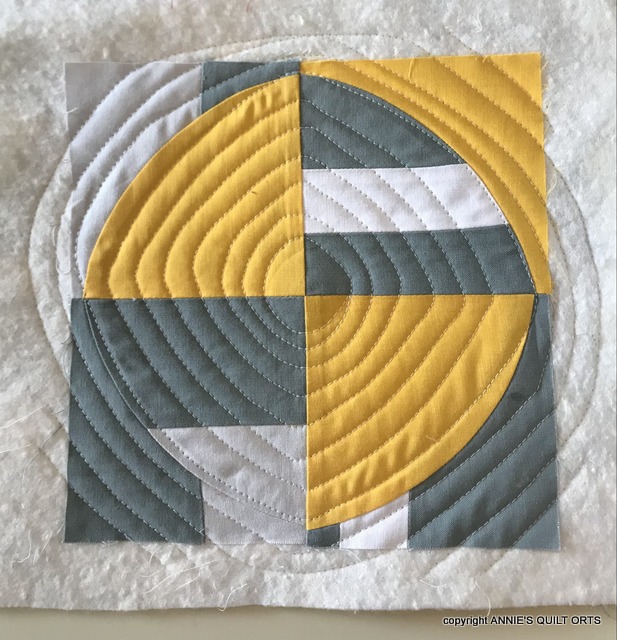