Some hours Saturday and Sunday were spent on the Mini Mod Swap blocks, Warm and Bright/White group.  These are 2" unfinished and templates were included with the signup and $5 donation. Before the templates came out, I had already sewn up a bunch of different blocks on my own. I was able to use some of them for my guild swap partners. 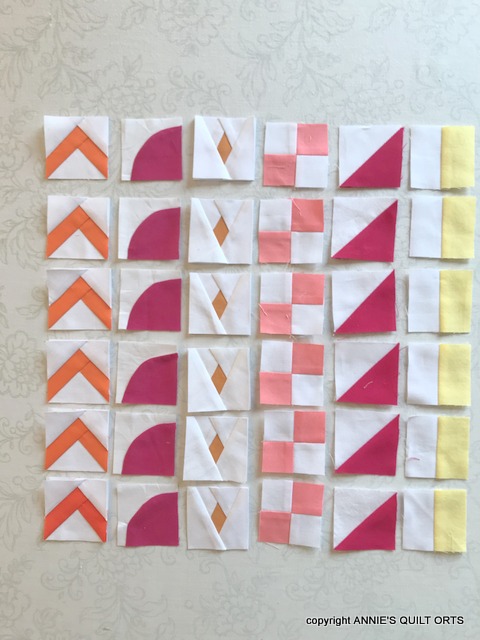 The three columns on the right were the first blocks I'd sewn.  I made a ton of the yellow blocks before I got the guide and templates, so have lots left over to mix in the final setting of whatever they will become.  The hot pink HSTs were already started, as well as the coral checkerboards.  Which is a good thing, because I mistakenly believed mailing day was March 8, when it was actually March 5... Saturday I spent many hours paper piecing the tiny ochre diamonds and orange arrows.   I made a full set of six drunkard's path blocks in a warm purple--but that color was not in the Warm and Bright group, so I started over with the deep pink. Those DP blocks were hard, even though made slightly oversized and trimmed down! 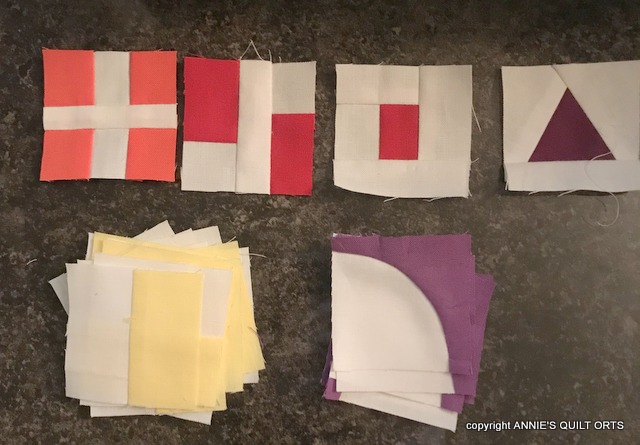 The top row are blocks I made before getting the rules.  I do like the purple DP blocks and will mix them in anyway, most likely.

Sunday I drove around dropping off the finished blocks, it was good to get out of the house on a nice day.  I found I had actually miscounted blocks needed and made an extra set that I kept.  One of  my guild swap partners did the same thing-- Tisha joined so many color groups that she ended up making 108 blocks total!  Her blocks in the Warm and Bright group are on the right.  Chris's blocks are on the left.  Chris contributed two sets of blocks for the color group, and even included 3 extra in her sets, an unexpected delight. 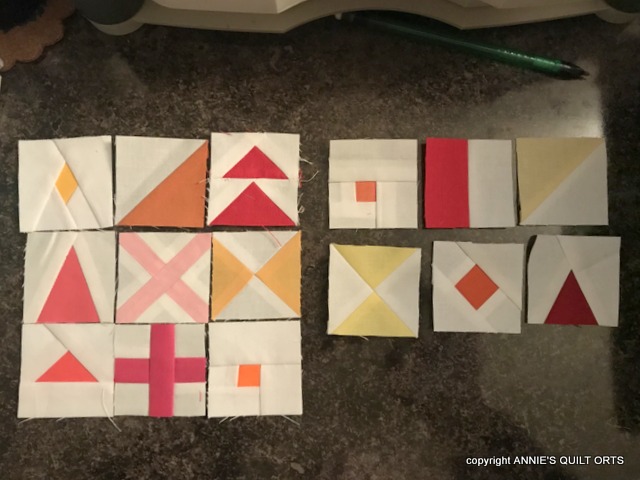 One more partner's blocks are on their way to me.  I don't know what I will make with the blocks, but have seen bags and mini quilts, pincushions and buckets on Instagram #minimodswap.  It has been a popular swap and over $10,000 has been collected by Berene at Happy Sew Lucky to donate to social causes.  That's a good thing!
Posted by AnnieO at 8:00 AM

Those are all interesting blocks ... I like the purple with your colors so nice for you to have a small collection of them. I'm looking forward to see what you do with them. Did you all make different blocks or were you assigned certain blocks? Just curious. Nice job.

What a fun gathering of blocks you have for playtime. Looking forward to seeing what comes of them.

Those are going to be so much fun to put together!

Oh, those are so tiny, but what fun to play with. Looking forward to seeing what they become.