Tuesday's Orts--bits of thoughts and scraps of events from my week that land here. 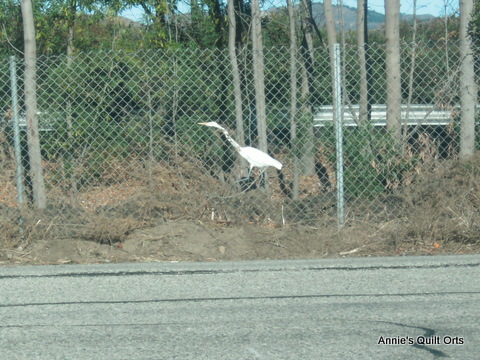 This white heron hangs around on our end of town from time to time but I had never seen it this close.  The funny thing was that he/she was in the exact same spot the following morning.  There must have been some good bugs dug up by the trencher!
Posted by AnnieO at 10:12 AM

Lovely long-leggedy bird. I agree with you about the storage bins, what's up with that?

Yeah Sister ! I always think the same thing about storage bins. How the hell am I supposed to know what 55 litres of fabric scraps looks like !

I dont envy Elaine's job but Im sure she will manage admirably.

A guy must have decided to lable bins in gallons - no woman would have come up with that :)

Julie in the Barn said...

I do use the quart size to freeze spaghetti sauce. I don't use the 1 gallons. I bought some 2 gallon baggies to put quilt projects in. Who knew my quilts measured 2 gallons? Weird. Love the herons. We have them all over the corn fields after they are plowed in the fall.

What a great photo of the heron! I love seeing them around here.

I'm curious how you found out the barking dog's name is Stella Louise. Possibly an up close and personal encounter with Stella's owner?
You have almost a surreal photo of the heron, so white against the background. Cool.

I agree, why gallons. What's worse? The ones labeled in liters!