My city/county has been on fire since Monday night. The Thomas Fire started northeast of us in the next city over, and due to severe Santa Ana winds, rapidly burned through 10-12 miles of dry brush in the foothills.   We lost power about 9 pm and, along with our neighbors, tried to find out from our cell phones what was happening.  This was the scene from our upstairs window as flames crept down the foothills a mile or two away. 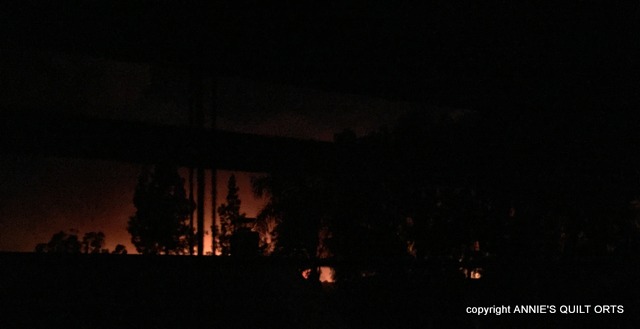 Evacuation orders were soon announced as the fire began to consume neighborhoods.  Our son was under mandatory evacuation, living very close to the hills, and he packed a bag and bugged out to his sister's at the beach. A nephew went to his grandparent's house. Our other daughter and her family packed up essentials for themselves and the kids and waited for word of evacuation, as did we.  It is funny what you find yourself picking up and considering valuable at a time like that.  We loaded the cars and dozed, on and off, through the wee hours of the night, but never received notice of need to evacuate--all the flames continued westward, away from us, miles toward the western edge of the city.  Our power was restored by about 9 am and we were able to watch news coverage of the horrible devastation of homes in the hills.  My brother's house was threatened, near where a rehab/psych hospital burned to the ground.  He evacuated to his son's house.  Other family and friends were evacuated and waited for word if their homes were spared. 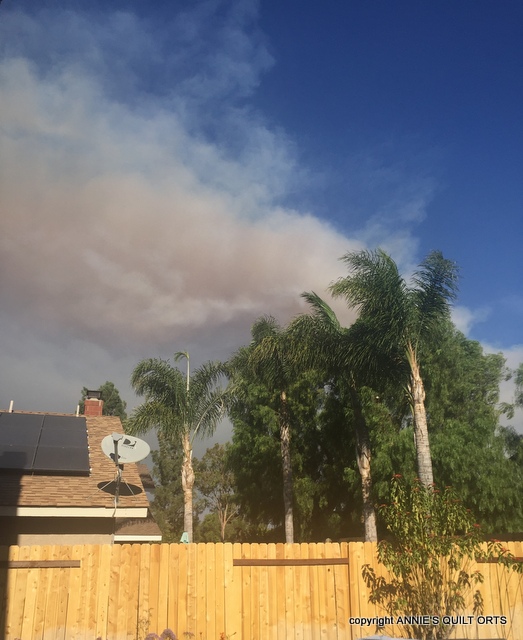 Towering smoke viewed from our backyard.  The wind picked up again in the afternoon and whipped the fire towards Ojai.  It jumped the highway and began burning all the way to the ocean, and even now has continued northward into Santa Barbara County after burning through La Conchita and the beach communities. 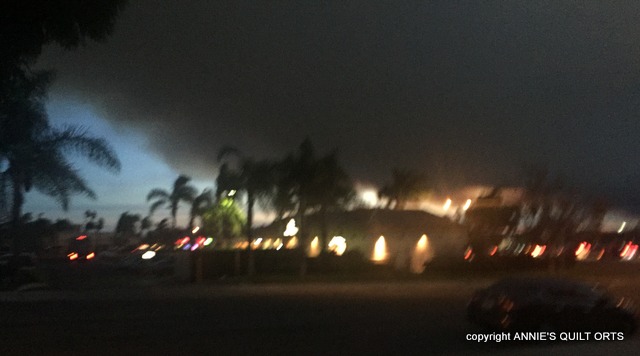 This very blurry photo was the smoke cloud as I left work Thursday.  All our offices were closed but one; this is looking  southwest to the  ocean.  When the winds were calm, the smoke sank to the ground. 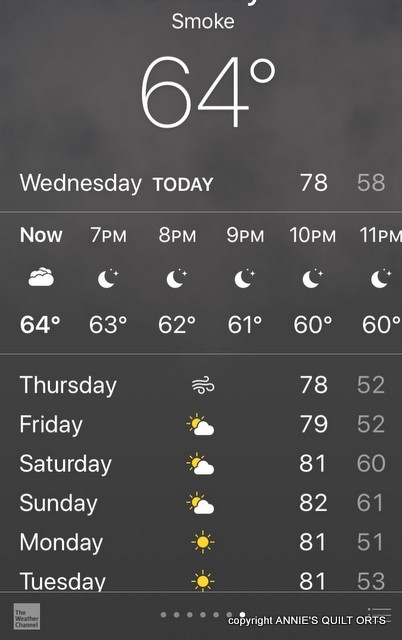 I had never seen this "Smoke" designation before on my weather app. Fires are still burning in Ojai, which was blazing all night with winds 30-50 mph with gusts up to 80, and it is heading to the national forest northward, with firefighters battling multiple other fires in LA and further south.  The Thomas Fire has burned more than 130,000 acres and is still only 10% contained.  There are at least two more days of Red Flag Warnings from the Santa Ana winds.

439 homes have been destroyed, in the hills of my city, where most of the nicest and more expensive houses were.  My doctor boss knows at least 10 other doctors who lost homes.  I watched a former doctor employer on TV as his house burned and collapsed in 30 minutes, while firefighters tried to keep adjacent homes from catching fire.  There is still danger and evacuations in place, plenty more dry fuel in the hills and embers that could be carried miles.  Amazingly, only one death has been attributed to the fires, a woman died in a car crash trying to escape the flames in Ojai.  The community has risen up and offered much to the evacuees and the fire and rescue personnel.  Rebuilding will be slow, and the bare hillsides may take years to recover.  I have heard of no one who wants to leave our beautiful city by the sea, and know the community will continue to offer help and reassurance.  We remain on alert, until this siege is over.
Posted by AnnieO at 5:02 PM

Just watching it on TV, it's unimaginable! I can't imagine losing everything like that. My bro is in San Diego and I know there's a fire near there. Haven't heard anything so must not be near him (yet). I remember visiting Yellowstone 3-4 yrs after their last horrific fire and it was still so awful but you could see signs of rebirth.

Sending prayers for you, your family and everyone affected by these fires...so scary. I hope the Santa Ana dies down soon, very soon.

I just watched the coverage of this fire on the news, as firefighters have been sent from our area to help out.
So glad your family has escaped the worst. I'll keep you in my prayers!

I watched the wall-to-wall coverage of the Thomas fire; then the Creek fire where friends evacuated (their's survived-neighbors did not), then the Rye (closest to us), then Skirball, and San Bernardino, and now down near San Diego & Temecula. I'm glad you are ok, and pray you and those you know will soon be out of all danger from the fires, including from the smoke. More dangers could come in the burned areas when the rains begin. It's a rough year.

You've described it so well....I feel it. My parents were under a mandatory evacuation to 2 1/2 weeks last summer for the Cedar fire in central CA near Bakersfield....it's quite scary. Keeping you and your family in my thoughts

Hope the worst is over...be safe 😊

You and your family and friends are in my thoughts. Hoping for the best...

Very glad to see your post and know that you and your family are all doing OK. I was wondering if you were affected. Thoughts and prayers for everyone in the area. It's been very hard to watch the news, I can't imagine having to live the news. Take care.

Oh my goodness, I have seen pictures on facebook but have not watched TV...I so hope it does not reach you and that you and your family stay safe...what a devastation.

Sending lots of hugs and best wishes to you, Annie. I hope the fire is nearing its end.