Sewing time was sketchy this past week but I did get a few things done. The block for the pizza box swap for guild was finished on time but I ended up not going to the meeting on Monday and then received two more pizza boxes the next day, so now I have a stack of three.  The next recipient will likely not be pleased to receive three at once--perhaps I'll parcel them out over the month, lol.

Sarah's box included a thick card catalog of block designs and I chose this 12" windmill block.  There were no instructions other than the size of pieces to cut for one's desired block size, but it went together easily--without any chopped off points, too, yay. 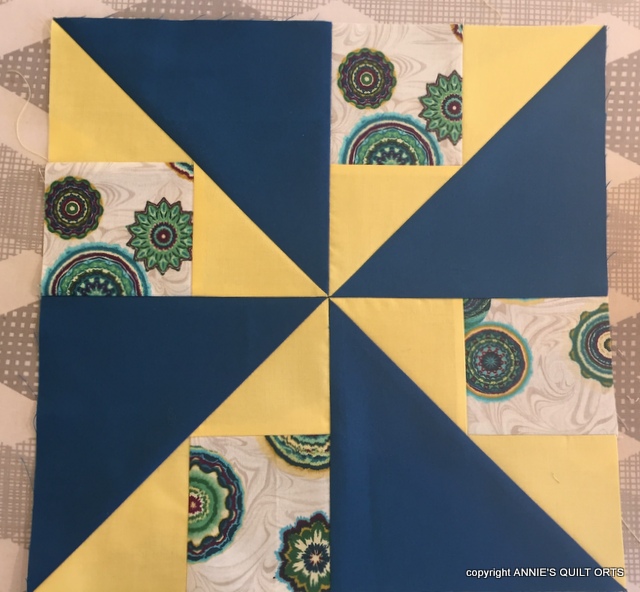 .
More Chunky Churn Dash blocks for my Dad's quilt were added to the piles.  I now have over 40 made and need at least 60. 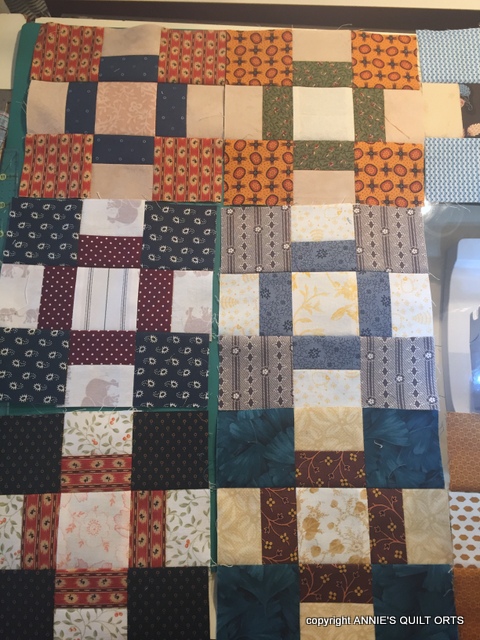 Stripes and dots and tiny prints--I'm having a ball playing in the scraps.  I'll need to figure yardage for the alternate block and any borders.

There were some test  blocks made for the newlywed's quilt, Dreamweaver, as well.  Since I am enlarging the quilt to throw size I do not want to cut 1000 2.5" blocks for the background, which is made up of Disappearing 9 patch blocks. 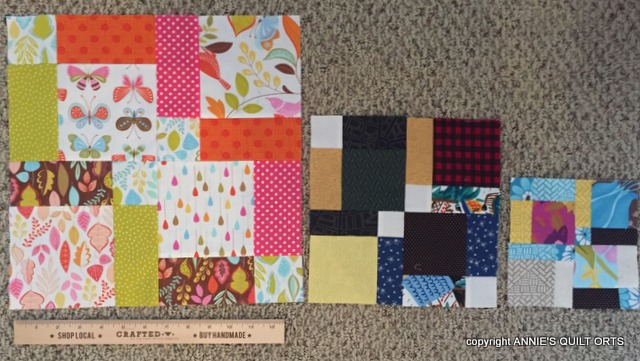 On the right is the DP9 made from the pattern specification of 2.5" squares that finishes at 6"; the left block is from 5" squares, finishing at 12", and the middle block from 3.5" squares, finishing at 9".  I'm happy with the middle block's size as it is not too large in proportion to the appliqued dreamcatcher that will come later. Tester pieces came from stash and not the grouping that will be used in their quilt.

Some more Log Cabin Loonie blocks are moving along.  I'm about halfway done with the 80 I want for my layout. 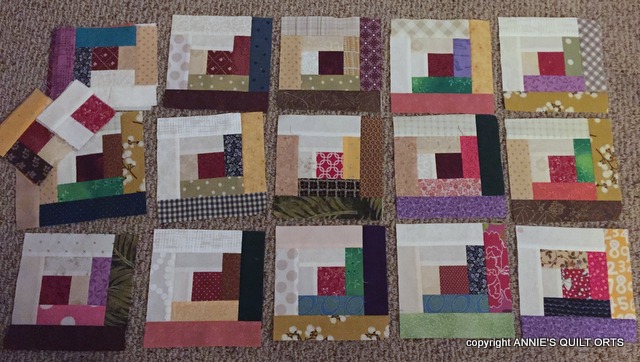 I'm using 1.5" strips precut to sizes for each round.  My blocks will finish at 7.5", an odd size, but it won't matter--the quilt will end up whatever size it ends up!
Posted by AnnieO at 6:30 AM

Looks like you got a lot done. Nice variety of blocks - no getting bored at your house.

For the love of geese said...

I really love the fabrics in both projects, both will be beautiful when you are finished. For the love of geese

Such diversity, Annie. I can't seem to make progress on one project, and you seem to do well juggling several!
I especially love the chunky churn dash and the log cabins.

You've got lots going on in the sewing room. As much as I hate making test blocks, it really pays off when you are checking out measurements. Happy stitching this week.

Wow! You have so many things going at once! Variety is the spice of life!